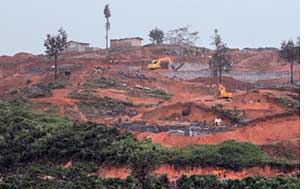 sri lanka launched a Carbon Fund in June under a public-private partnership to encourage companies to get into businesses that would earn them carbon credits. B M S Batagoda, chief executive officer of the Carbon Fund, said the fund would bundle the carbon credits earned by small companies and sell them to international buyers who prefer larger volumes. Environmentalists, however, see carbon trade as a "deception by the West".

Sri Lanka has also launched a Climate Change Secretariat, the designated authority for clean development mechanism (cdm) projects. The current rate of a tonne of carbon dioxide is us $14 and is expected to increase with more countries buying carbon credits.

Anura Jayathilake, director of Climate Change and Global Affairs at the environment ministry, who is heading the Climate Change Secretariat and the Carbon Fund, said, "We have the potential to earn six million tonnes of carbon credit. At the moment, however, we are planning to harness three million tonnes." The money could be used for sustainable development, said Mohan Munasinghe, vice-chairperson, Intergovernmental Panel on Climate Change.


Environmentalists contend that cash infusion from carbon credits will go straight to the companies. They say communities will not benefit from the Carbon Fund initiative except that some clean-energy projects will come up in their neighbourhood.

Hemantha Withanage, executive director of the Colombo-based Centre for Environmental Justice, who has studied the Asian Development Bank's Carbon Market Initiative, says that in some cases credits are not based on proven reductions. Instead of reducing emission sources, cdm projects create new sinks to absorb carbon.

Environmentalist Jagath Gunawardene said, "Western companies are polluting the environment and getting away by paying for the lifestyle they want to lead irrespective of the damage they are causing." For example, he said, old forests are not considered for carbon credits while new plantations are. This is not an incentive for retaining old forests, which are important for diversity, he added.

The majority of the shares of the Carbon Fund (Ltd) will be held by the government. The board of directors will consist of the secretary to the treasury, secretary to the environment minister, the chairperson of the Central Environment Authority and three nominees from private-sector shareholders.