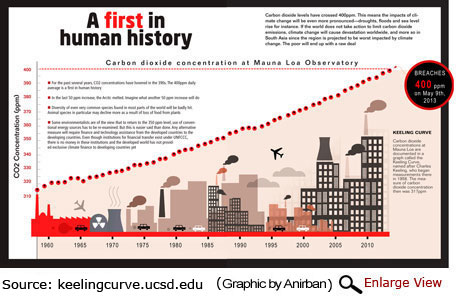 Roughly two weeks ago, climate talks in Bonn began with a warning: carbon dioxide levels are edging towards the threshold level of 400 parts per million (ppm). It is now reported that carbon dioxide has breached the 400 ppm mark. This was recorded at the Mauna Loa recording station in Hawaaii, run by the US National Oceanic and Atmospheric Administration (see infographic). This is the first time ever that such an occurrence has been reported.

So what does breaching the 400 ppm mark mean for climate change? “Two things,” says Yogesh Tiwari, scientist at the Indian Institute of Tropical Meteorology at Pune. “One, the sources of carbon dioxide have increased, and and two, reaching 400 ppm represents a dire experiment with the climate system and the impacts may become more pronounced." Also, this 400 ppm level specifically indicates the rise of carbon dioxide sources in the US since this is not a representation of global carbon dioxide concentrations, clarifies Tiwari. “We will need to see other monitoring sites such as the ones for Australia, Japan and New Zealand to arrive at a composite picture,” he adds.

Scientists, though, advise caution in directly linking this 400ppm breach with temperature rise. “This 400 ppm breach cannot be directly linked to temperature rise since this is a long-term phenomenon and various models are employed to draw a linkage and studies are continuing,” says Tiwari. However, given that the impacts of climate change will be more pronounced, action to reduce carbon dioxide emissions is a must, agree scientists.

Christina Figueres, executive secretary of United Nations Framework Convention on Climate Change (UNFCCC), also agrees. “The world must wake up and take note of what 400 ppm CO2 means for human security, human welfare and economic development,” Figueres posted on twitter. Referring to the 400ppm mark as “danger zone” in a press release issued by the UNFCCC, she urged that urgent action is required by the international community, governments at all levels and business and finance communities.

Urgent action is necessary but countries don’t even agree on the basics to tackle climate change as was evident at the recent climate talks in Bonn. Differences remain over the key principles of the UNFCCC. And if action is not taken, it is clear that favourable conditions supporting life on Earth may turn into a memory.