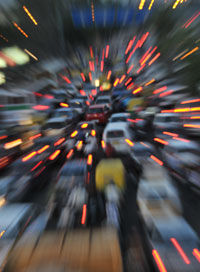 Alarmingly high levels of benzene have been reported in Delhi’s air. The levels in some areas like around IGI airport and Civil Lines, exceed the annual standard of 5 microgramme per cubic metre by 2 to 5 times. This is extremely worrying as benzene—a volatile compound of petrol—is a toxic air pollutant and a potent carcinogen. It can be extremely harmful even at trace amounts. Being volatile, it also contributes towards formation of yet another harmful gas, ozone.

The available evidences from Delhi Pollution Control Committee (DPCC) point towards benzene hotspots in heavy traffic locations in the city (see Graph 1: High benzene levels in heavy traffic locations of Delhi). Independent studies carried out by scientists at the Jawaharlal Nehru University during two different time periods—2001 and 2002 and winter months of 2007—also showed an increase in benzene levels in the city. The study also attributed the rise to increase in vehicular traffic in the city.

Petrol is a highly volatile fuel and quickly evaporates during loading and dispensation. This makes the refuelling stations high-risk areas. Petrol pump workers, dealers and vehicle users are at serious risk of exposure. It’s not just Delhi, smaller cities like Bengaluru, Kanpur and Pune have reported even higher levels of benzene.  The peak levels in these cities are shocking.

Benzene is a potent carcinogen and is blamed for leukemia. The WHO estimates a 4 in 1 million risk of leukemia on exposure to benzene to a concentration of 1μg/m3. Increased incidences of leukemia (cancer of the tissues that form white blood cells) have been observed in humans occupationally exposed to benzene.  Long-term inhalation can cause various disorders in the blood, including reduced numbers of red blood cells and aplastic anaemia, especially in occupational settings.

There are some short-term effects as well. According to US Environmental Protection Agency exposure to benzene may cause drowsiness, dizziness, headaches, as well as eye, skin, and respiratory tract irritation, and, at high levels, unconsciousness. Women may suffer from reproductive effects if they are exposed to high-levels. T K Joshi, doctor at Maulana Azad Medical College in Delhi, says women are particularly vulnerable to benzene poisoning as it is a fat soluble toxin.

Air-borne benzene comes from fuel vapourisation and evaporation and exhaust emissions from vehicles. Benzene and aromatic compounds occur naturally in petroleum and become more concentrated when petrol is refined to produce high octane gasoline. While the benzene content in petrol must be minimised, total aromatics must also be reduced because this also contributes towards formation of benzene.

India has taken steps to meet the international standards of 1 per cent benzene in petrol. In Bharat Stage IV petrol, currently available in major cities, the total aromatic content has been reduced to 35 per cent and olefins—unsaturated  chemical compound containing at least one carbon-to-carbon double bond and widely used in petrochemical industry—content to 18 per cent. But given the level of air-borne benzene in cities and rising level of vehicular traffic there is need for further control. The global best practice shows that benzene content–as in the US–is now 0.62 per cent and the aromatics 25 per cent in polluted areas.

As petrol quickly evaporates and adds to the emissions, cities will require very stringent control on loss of fuel through evaporation. All refulling stations should be retrofitted with vapour recovery system that traps the petrol vapour and puts it back in the tank. (See Box: How other countries are reducing evaporative losses from refuelling stations?). This is needed while dispensing fuel to vehicles as well as at the storage tanks.

Moreover, petrol can also evaporate from motor vehicle tanks. Already evaporative standards have been set for cars. But such standards are yet to be enforced for two-and three-wheelers. This has already been done in small countries like Thailand. In India estimates of evaporative emissions from two-wheelers are not available in public domain. Global assessments have shown that motorcycles equipped with carburetor—a device that blends air and fuel for an internal combustion engine—emit about 1.2-1.3 kg hydrocarbons per year per vehicle.

Other countries like the US and Europe have taken further steps to equip the vehicles with on-board recovery of petrol vapour and to put it back in the tank. This is urgently needed in India as well to control evaporative losses from the vehicles.

To further reduce benzene emissions from vehicles India would need to make a quick transition to the next level of emissions standards. This will enable advanced technologies and emissions control systems. In the two-wheeler segment switch from old two-stroke engines to four-stroke engines has helped to lower the exhaust emissions significantly. However, all three-wheeler models petrol as well as gaseous fuel models need after treatments systems as well to scavenge the toxic emissions.

Gross neglect of petrol emissions will not only add to the health risk but also compound fuel costs. At a time when petrol is so precious and expensive and energy security under threat, letting petrol evaporate through negligence will hurt all. This adds enormously to energy costs. Both petrol pump dealers as well as vehicle users need to be made aware that evaporative losses of petrol means direct fuel loss. It is estimated that 1,000 cubic metre of petrol vapour is equivalent to losing about a litre of petrol. This, therefore, makes eminent sense to capture  vapour and put it back in the tank to save fuel.  This will not only strengthen energy security but also reduce public health risks.