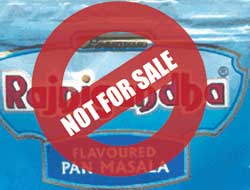 Maharashtra Food and Drug Administration has banned the sale of Rajnigandha brand of pan masala on the ground that it contains magnesium carbonate, a probable carcinogen the sale of which in the form of gutkha or pan masala is banned in the state. Acting on a consumer complaint, fda conducted tests on Rajnigandha pan masala and found it laced with the chemical compound.

"During the analysis we found it (Rajnigandha) contained 2.52 per cent magnesium carbonate. Since it is a banned item, we have seized the stocks of the product," revealed M Ramesh Kumar, fda commissioner. fda has seized pan masala stocks worth Rs 11.37 lakh and registered a case against Rajnigandha manufacturer Dharampal Satyapal Limited, under the Prevention of Food Adulteration Act, 1954.

The company has not made any official statement on the matter. fda had cracked its whip on the Rs 2,000 crore gutkha industry early this year, when it banned the sale of gutkha in the state for its magnesium carbonate content. It also proposed a national ban on gutkha (see Down To Earth, 'Gutka banned', February 28, 2005). But the Union ministry of health and family welfare has not yet acted on the proposal.