Is the answer to the AIDS problem in migrants 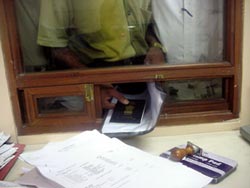 Migrant Forum, a part of Coordination of Action Research on aids and Mobility (caram), Asia, an international organisation empowering migrants against aids is active in 21 'migration prone' villages in the Kalpakkam area of Tamil Nadu. Operating since 1998, the forum initially helped in migration related matters such as visa procurement, contacting job agents etc. In 2001, it took upon itself the responsibility of sensitising the villagers about Acquired Immuno-Deficiency Syndrome (aids). This followed global trends indicating that migrants were likely victims of Human Immuno-Deficiency Virus (hiv)/aids, given the shift in sociocultural and geographical loci.

There are two kinds of migrants from India -- unskilled and skilled. The villagers of Kalpakkam belong to the former category. The migrants include men and women ranging from ages 20-35 heading for the Middle East and south eastern nations such as Singapore and Malaysia to work as domestic helps, masons, sweepers, tailors etc. Most of them are away on three-year contracts, during which time they might have other sexual partners. The chances are equally high for the spouses left behind in India. In the circumstances, the risk of contracting hiv/aids is high, thereby making counselling imperative.

In the absence of an aids awareness programme by Indian authorities, the forum included hiv/aids education in its programme. Right now its work plan involves close engagement with would-be migrants, their spouses and those who have returned from their sojourn. Field workers live with the community for a while, engaging in discussions about the disease, the how and the why and the preventives to be aware of. Information on condoms and safe sex is given out. Since 2001, nearly 3,000 people have been sensitised by the forum.

According to Bernard D'Sami, director, Migrant Forum, the Indian authorities ignore even basic general health remedies. Indeed, a sorry state of affairs, given that these migrant workers earn handsome remittances -- as much as us $12.13 billion as per the forum's 2002 report.