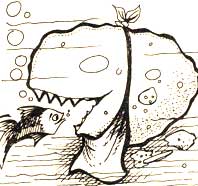 THE INCREASE in phosphate wastes released into rivers over the last 20 years may in turn have increased the frequency of "red tides" (coloured springtime algal efflorescences) which poison and kill numerous fish in American estuaries.

Certain single-celled algae called dinoflagellates , which make up a large part of ocean plankton, produce potent nerve toxins that make the red tides poisonous. Until recently, it was assumed the algae produced these poisons to protect themselves from herbivorous fish.