Foreign buyers of Indian carpets insist that if child weavers are employed, they will not accept the product. The Indian government and manufacturers must now find a way out to protect a multi-crore industry. 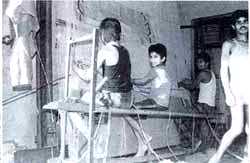 THE INSISTENCE of foreign importers on not buying Indian carpets woven by children has begun to tell at every level in a Rs 750-crore industry in which weavers, exporters and the government have vital stakes.

German consumers, the largest buyers of Indian carpets, insist that the carpets they buy must be certified to prove they were not produced by child labourers. And, a bill sponsored by US senator Tom Harkin that would ban the import of anything produced by children is expected to be passed any day.

All this is sending shock waves through the Indian carpet industry, with several buying agents refusing to pick up consignments. Pradeep Kumar Jaiswal, an exporter from Bhadoi, estimates 50 per cent of production has been affected because of this controversy. "Exporters still have a considerable stock, but the real crunch will be felt only after six months," he predicts.


In a bid to save the situation, the government has launched a publicity campaign abroad to convince the world that Indian carpets are free of "sweat and blood of a child". A brochure distributed at the Domotex International exhibition in Hanover recently stated, "The carpet industry categorically affirms that there is no need for child labour."

The government also intends to make registration of carpet-weaving looms mandatory and take a census of weavers so that child labour laws can be strictly enforced. But this announcement has upset loom-owners who complain only they will be hauled up for employing children and not the exporters, who also have a vested interest in ensuring that cheap labour is used. Their complaint is supported by activists committed to eradicating child labour. "The entire chain linking loom-owners, contractors, weavers and exporters should be registered," says Kailash Satyarthi of the Bandua Mukti Morcha (BMM).

Meanwhile, exporters and contractors in Mirzapur have spread the word that some people are out to snatch away the livelihood of the weavers. Ramakant Rai, director of the Varanasi-based Saghan Kshetra Vikas Samity, an organisation fighting child labour, told this reporter, "They are openly telling people not to divulge any information to outsiders about the real status of child labour. The weavers, being entirely dependent on them for orders and raw materials, are keeping mum."

Indeed, even a mention of child labour in the Mirzapur-Bhadoi area draws hostile glances and young weavers either scurry away or are shooed off by their employers when a stranger is spotted.

Weavers and loom-owners have become openly defiant. "You cannot stop children from working," says Mohammad Imtiaz, a weaver in Kacchi Kalan in Mirzapur. And, another weaver, Mohammad Channa, offered a challenge. "You cannot inspect us all the time," he said.

Some loom-owners even try to justify keeping weavers captive, saying Bihari weavers often run away after taking money in advance, thus bringing production to a halt. A loom- owner in Mirzapur, who has already been charge-sheeted for employing children, admitted he locks up his employees at night.

Carpet exporters have gone on the offensive against organisations lobbying with foreign governments and non-governmental organisations (NGOs) for a ban on child labour. Said an exporter in Varanasi, "Maybe 10 per cent to 12 per cent of the exporters and loom-owners are exploiting children. Why should all of us be ticked off for that?"

According to a 1992 survey by the National Council for Applied Economic Research (NCAER), the population of working children was 8 per cent of the total labour force. But Satyarthi disputed this, citing two studies commissioned by the Supreme Court in 1984 and 1991. The first, he says, put the child labour population at 85 per cent and the second showed 70 per cent of them were bonded. "In fact, in the last 10 years the number of children working has tripled," Satyarthi contends.

UP handicraft development commissioner Ajay Shankar disagreed with Satyarthi. The child labour population, he says, is not as large a segment of the total labour force as it has been made out to be.

What about the vacuum that abolition of child labour would create? Satyarthi argues it can be easily filled by the unemployed adult workers, who number in plenty in the area. However, exporters fear this would hike production costs and curtail the demand abroad for carpets. Jurgen Muller of the Indo-German Export Promotion Project (IGEP) says such apprehension is unjustified because production cost may increase by only about 5 per cent and this can be absorbed easily by the European market.

Nevertheless, the child labour controversy has created a schism among exporters. The small- and medium-manufacturers in Mirzapur have formed a Carpet Manufacturer Association Without Child Labour and declared their looms open to NGOs for inspection.

On the other hand, exporter Ajit Shankar, who is a former general secretary of the Eastern UP Exporters' Association, says there is no harm in children working. "If the children were not working, they'd be begging," he says. "Besides, for them it is a training, which increases their future job prospects." As for loom registration, Shankar termed it "a stupid thing". Some government officials even assert registering looms and taking a census of weavers would be neither helpful nor feasible, given the large number of looms and their wide distribution.

Meanwhile, many wonder why the Union commerce ministry is being tardy in notifying compulsory registration of exporters with the Carpet Export Promotion Council. This, they say, would ensure adherence to a code of conduct that was prepared at the top level. Ministry officials explain the delay saying that it is only a proposal and the notification would be issued only after verifying its full implications. But not many are convinced.