They grow fast and their foliage blocks sunlight to weeds, farmers in Maharashtra have found 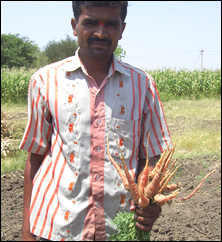 Farmers in India lose Rs 52,000 crore worth of crops annually because of weeds. Manual weeding constitutes major portion of the cultivation cost and chemical herbicides are no solution because weeds grow immune to them. In Maharashtra farmers have found through experiments that weeds stay away from carrots. They yield abundant foliage, which covers the ground completely, blocks sunlight and suppresses all weed varieties. Scientists at the Marathwada Agriculture University in Parbhani district agreed that the solution to keep weeds from farms might lie in growing carrots.

Weed infestation rema-ins low even if carrot is not planted in the consecutive season, the farmers from Solapur and Beed districts said.

Prakash Mulik, who grows tomatoes in two hectares (ha) in Modnimb village in Solapur, has had the weed problem for almost 10 years now. He tried deep ploughing with a tractor, manual weeding and herbicides to rid his land of congress grass (Parthenium hysterophorous) and harali (durva or Cynodon dactylon). Nothing worked. “The weeds would rise higher than tomato plants and damage them. My losses were five tonnes an acre,” he said. The optimum production in the area is 15 tonnes per acre.

The break came when Mulik’s neighbour, Mahadeo Manale, suggested last year that he grow carrots. Manale’s carrot farm is free of weeds. Mulik acted on his neighbour’s suggestion on half an acre and the result surprised him. The carrots grew rapidly and covered the ground so fast that the weeds did not stand a chance, said Malik. At the end of two months, the six-tonne yield brought him Rs 30,000, two months of abundant green fodder for his three heads of cattle, in addition to savings of Rs 6,000, which he would have otherwise spent on herbicides, weeding, pesticides and irrigation.

Asaram Kale from Nalwadi village in Beed decided on carrot merely as a crop rotation exercise in 2008. He reaped a profit of Rs 70,000. In 2009, he planted soybean on the same land, and weed infestation remained low. Mulik planted gawar beans and coriander on the plot where he grew carrot.

“There is no harali, and very few small congress grass have shown up,” said Mulik whose adjoining field is overrun with harali. He plans to grow carrots there this year.


Since carrot roots go deep into the soil and soften it, weed roots and rhizomes are also uprooted along with carrots during harvest, said Anand Gore, associate professor of agronomy at the university. That is also part of the reason weed infestation remains low irrespective of the crop planted in the consecutive farming season, he added. Fifteen years ago the university had conducted an experiment in intercropping carrots with sugarcane and got positive results for production and profit. “One of our observations at the time,” said Gore who participated in the study, “was the quantum of weeds on the plot was less.”

The university did not follow up the result at the time because weeds were not a menace then and carrots were a minor crop. “Now that we are hearing success stories of the carrot experiment, we will study it, and try to arrive at more critical observations,” he said. The faculty, for now, has been passing on the carrot tip to farmers informally.

Farmers, though happy with the experiment, advise caution. “The experiment is successful because carrots fetch a good price in the market. If every farmer were to grow carrots, the glut would bring the prices down,” said Manale. He, along with Malik, plans to experiment with ratal (ratalu or Dioscorea alata), a yam variety that yields abundant and fast growing foliage, as an alternative weed control crop. “The potential of other cover crops, mostly vegetables and greens, will also have to be explored so that farmers can maintain variety and make profits. Inter-cropping possibilities will also need to be tested,” Gore added.