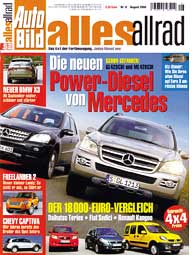 The India Today Group and German publishing firm Axel Springer have launched a fortnightly auto magazine Auto Bild. According to Ashish Bagga, the ceo of the India Today Group, "The joint venture is a need-based funding experiment." Auto Bild initially aims at a circulation of 20 per cent of the total automobile magazine circulation in India, Bagga said.

According to Axel Bucher's president Ralph Buchi, "Tata's soon-to-be launched Nano had partly influenced the Springer Group to start its Indian operations." Aroon Purie, Editor-in-Chief, India Today Group, said that India needed a "quality auto magazine and we believe that associating with the world's leading group of auto publications will deliver a high-quality and consistent product that has hitherto not existed in the Indian market."