Transnational corporations are playing havoc with the lives of farmers 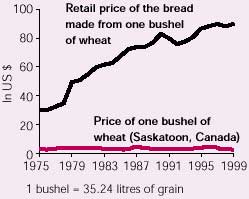 • Transnational corporations (TNCs) control the price of commodities in a way that farmers get less for their produce. For instance, TNCs reduced the price of bananas for consumers from 1.08 (US $2, at current rates) per kg in 2002 to 0.74 (US $1.37) per kg in 2004 in the UK. The brunt of the price cut was borne by the growers in Costa Rica, who did not get even the legal minimum price. Nor did the plantation workers get the legal minimum wages

• Aggressive takeovers by Nestl and Parmalat in Brazil forced over 50,000 dairy farmers out of business. In 1990, Parmalat entered South Africa's dairy market and offered products to retailers at a reduced rate. This forced the dairy farmers to slash their prices by up to 28 per cent. Once established, Parmalat increased its selling price for retailers

• In Southern India, auction prices for tea fell by around 33 per

• TNCs have set high quality standards. Farmers trying to meet these standards spend more on inputs such as seeds, pesticides, herbicides and fertilisers. In Andhra Pradesh, farmers paid up to Rs 1,600 for a 450-gramme packet of Monsanto's genetically modified Bt cotton seeds. In comparison, a packet of traditional cotton seeds costs Rs 450-500. Despite the higher costs, some Bt cotton yields were lower than that of local varieties. On an average, the farmers using Bt seeds earned Rs 1,526 (US $35) less per acre than those using other varieties

• TNCs monopolise the market by removing marginal farmers from the picture. In Brazil, the total area of farms larger than 10,000 hectares (ha) rose from 17.8 million ha in 1980 to 20.6 million ha in 1996 and almost 14,000 farms smaller than 10 ha disappeared. This affects rural employment

• In developing countries, farmers focus on cash crops. As TNCs control the price of these products, the farmer gets less money to buy food with

• The farmers are kept away from lucrative parts of the business such as value addition. For instance, the contribution of developing countries to value addition in the cocoa trade declined sharply from 60 per cent in 1970-1972 to around 28 per cent in 1998-2000

• It has been estimated that if the prices for the top ten tropical commodities had risen in line with inflation over the last twenty years, the countries producing these goods would have received an extra US $242 billion in 2002