Castle in the air 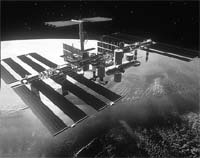 a flawless countdown, a false dawn over much of Florida, gasps and cheers from onlookers marked the launch of space shuttle Endeavour , aptly named as it is humankind's first attempt to make a room with a view in outer space. The space shuttle blasted off from the Kennedy Space Centre in Florida, usa , on December 4 to begin the orbital construction of the us $60 billion international space station, indeed an endeavour by 16 nations to conquer the cosmos.

The space station, which is scheduled for completion in 2004, will boast of a permanent laboratory in a realm where gravity, temperature and pressure can be manipulated to conduct numerous scientific and engineering experiments that are impossible down here on Earth. The space station will be a test bed for future technologies and a laboratory for research on new, advanced industrial materials, communications technology, medical research and much more.

Nearly 250 miles above Earth, the nine astronauts aboard the shuttle got to work soon after their landing. It took Colonel Jerry Ross of the us Air Force and James Newman, a physicist, three space walks totalling 21 hours and 22 minutes to complete the construction work in the outpost. Most of the spacework was dedicated for the construction of the space station's Zarya and Unity modules. Before their return to Earth, the astronauts had managed to release two building blocks of the international space station to the orbit. It is for the first time two separate blocks are orbiting the Earth on their own.

In January 2000, an international crew of three will begin living aboard the space station, starting a permanent human presence in space. The crew has been undergoing training for the mission since late 1996 and includes International Space Station Commander Bill Shepherd, a us astronaut, Soyuz commander Yuri Gidzenko and flight engineer Sergei Krikalev, both Russian cosmonauts. The first crew will spend three months aboard the station. When they arrive, the station will consist of three modules: the Russian Service Module serving as living quarters and onboard control centre, the us -funded and Russian-built Zarya , a module providing supplementary power and propulsion functions; and the us -built Node 1 , a connecting module that provides the attachment points for future us segments.

Controllers of the space station's flight at Mission Control, Houston, usa , and at the Russian Mission Control Center in Korolev, outside Moscow, will now spend the next five months monitoring the station.

Endeavour and two types of Russian rockets will conduct 45 missions to launch and assemble more than 100 elements which will be needed to complete the station. In all, 460 tonnes of structures, modules, equipment and supplies will be placed in orbit by the year 2004. It will require an estimated 159 space walks to build and maintain the space station which will eventually stretch as long as a football field.

The space station is the largest scientific cooperative programme in history, drawing on resources and the scientific expertise of 16 nations. The us is leading the global community in the construction of the space station. The project is so complex that no one nation could tackle it alone. The us , Canada, Japan, Russia, Brazil, Belgium, Denmark, France, Germany, Italy, the Netherlands, Norway, Spain, Sweden, Switzerland and the uk have come together in one of the largest non-military joint efforts in history. The programme involves more than 100,000 people at space agencies and hundreds of companies around the world.