It takes guts to make the most expensive coffee 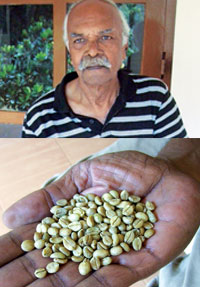 The shiny, greenish-grey beans look no worse off for having passed through the Asian palm civet’s digestive system. “I can’t tell the difference between this coffee and my normal parchment coffee, but connoisseurs say it has a subtle nuttiness,” said septuagenarian coffee planter T S Ganesh, the only producer of this rare coffee in India. He calls it Kari Beck coffee, after the Kannada name for civet. “I can only say that it is very good coffee,” he added with a chuckle.

In the 1980s, Ganesh, then a smallscale industrialist in Bengaluru, read in the National Geographic about Kopi Luwak or cat coffee. In the 1990s, when he saw lumps of coffee beans lying around in his plantation, he knew instantly he was looking at the world’s most expensive coffee.

Passing through the gut of the cat, which eats coffee berries for their juicy pulp, does not change the beans in any visible way. “The scat is clean, containing nothing but beans,” assured Ganesh. They just have to be washed, dried and husked. They do not even need to be fermented like parchment coffee—the cat does that job in a single night.

The global yield of Kopi Luwak is about 200 kg a year, and its price in the international market is a whopping US $600 a kg. After all, one has to go around looking for the lumps under bushes. Ganesh produces three to four kg a year on his nine-hectare plantation in the Biligiri Ranganatha Temple Wildlife Sanctuary in Chamarajanagar district of Karnataka.

The civet that value-adds Ganesh’s coffee beans also visits farms of 2,500 Soliga tribal families who cultivate coffee in the sanctuary. Stories of how he sells beans from civet scat at Rs 250 a kg— more than twice the price the Soligas receive—have been around for years but no one has tried to process them separately.

Is it not possible to train the tribals how to produce the expensive beans? Ganesh thinks not, for several reasons. First, there is no market in India. “I have tried sending samples to several European countries. The response was enthusiastic but I didn’t receive any order. Probably they don’t trust India because it is not a conventional source of the coffee variety,” Ganesh said. He also fears that given the lure of better prices, some could cheat by mixing the excreted seed with ordinary coffee beans, which, in the international market would mean swift and permanent blacklisting of the country.

C Madegowda, researcher at ATREE, a non-profit in Bengaluru, agrees that cheating cannot be ruled out. Madegowda, a Soliga, estimates that collectively, all Soliga tribals could procure about 100 kg of cat coffee. “But they find it too much of a hassle,” he added.

Ganesh, who claims to stick to production standards scrupulously, gifts most of his produce to friends, and keeps some for himself. “People enjoy the novelty. Some even find the taste special,” he said, offering a hot cuppa.

In the past two-three years, the production of cat coffee on his farm has fallen due to changes in temperature and rainfall patterns. “I have saved some from last year,” Ganesh said, pointing to the jar kept on the coffee table in the middle of his portico. It barely had two handful of beans.
Food Wildlife Wildlife Wildlife Trade Trade Karnataka India Coffee Coffee Chamarajnagar (D) Biligiri Rangaswamy … Agriculture Education Environment Canada NGO Media & Review
Donate Now