Cat gets new lease of life 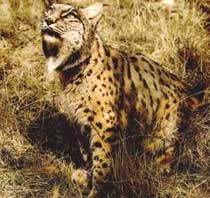 the government has announced a us $7 million plan to save the world's most endangered cat species. There has been an alarming drop in the population of the Iberian lynx that resembles a leopard and feeds on rabbits. Reasons for this decline include habitat loss for the lynx and its rabbit prey, illegal hunting and accidental killing.

The plan aims to protect and restore the potential natural habitat and increase the numbers of rabbits and other prey. The scheme also aims to improve access to water for the scattered population of these cats and remove man-made obstacles like roads that restrict their habitat.

It also hopes to raise lynxes in captivity and protect the mountainous scrubland refuges in central and southwestern Spain where more than 250 Iberian lynx venture.