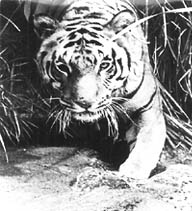 the wildlife conservation efforts suffered a major setback following the recent killing of four tigers in the Dudhwa Tiger Reserve, Uttar Pradesh. All the tigers are said to have been killed by poisoning. In December last year, two tigers died from poisoning in Jim Corbett National Park, Uttar Pradesh.

According to statistics, nearly 65 tigers were killed during 1997. Wildlife activists and environmentalists estimate that the tiger population -- 3,750 in 1993 -- may have gone down to 3,000. The cases of tiger deaths due to poisoning have increased drastically in recent times. Last year, 20 tigers were reported to be killed by poisoning.

Apart from poachers, a large number of tiger deaths are associated with the residents in the vicinity of the national parks. People resort to such methods when a tiger kills cattle in their villages. This is despite the fact that government provides compensation to villagers whose cattle is killed by the tigers. Following the increase in tiger deaths, the Wildlife Protection Society of India has recently requested Project Tiger, for a survey of compensation for dead cattle in last five years.