Caught between athletes and technology

Technology is taking sports to new highs, triggering a debate on whether competitions should be between people or between machines. 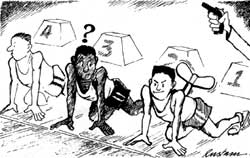 WHO MERITED the gold medal and world record for the 4,000 metre individual pursuit event in cycling at the Barcelona Olympics -- Chris Boardman or Lotus Engineering, the manufacturers of the bike? And are Nigel Mansell's eight Grand Prix wins this year a reflection of his skills or a credit to car-maker Williams-Renault? In tennis, to what extent does Goran Ivanisevic's dreaded serve come from his own power and how much is due to carbon-fibre rackets with larger heads?

Questions on the role of high-tech equipment in enhancing sports performances are getting increasingly difficult to answer. Where does one draw the line between human skills and technology in a field that is already been tainted by competitors using drugs? As if this is not enough, scientists now say it may soon be possible to manipulate and improve muscle fibres genetically.

Several cyclists in Barcelona used a new, drag-reducing wheel that enabled them to clip 10 minutes in a 100-mile time trial. While Boardman capitalised on the "aerodynamic bike", its manufacturers lost millions of pounds because the design was not protected or patented.

Another development at the Olympics was the use of a meat extract that reduces fatigue. The British athletic team doctor and coach both said several members had taken high doses of creatine, a substance in meat that provides extra energy to the muscles.

Creatine helps in three ways: it provides a reserve source of energy in muscle cells, neutralises acids that cause fatigue during exercise and helps transfer energy across cells to the proteins which makes muscles contract. While no sporting authority objected to the use of the substance, it is not clear whether taking creatine violates International Olympic Committee regulations prohibiting the consumption of orthodox dietary components in abnormal amounts.

The advent of technology into the arena has led to a debate on whether it should be banned like performance-enhancing drugs. Sports purists want competition to be between people and not between technologies. But engineers argue that barring technology from sports would be as absurd as banning popular electronic gadgets. In cases where technology totally eliminates skill and where safety is at stake, there is a case for banning it. In sports like hang-gliding, racing and yachting, however, souping up the equipment is part of the competition.
But what could turn out to be more controversial than all this stems from a report in the New Scientist (Vol 1832) which says ongoing research on genetic sequencing and cloning, if successful, would allow injections of DNA that can "reprogramme" muscles. Writes Geoffrey Goldspink, professor of anatomy and developmental biology at the Royal Free Hospital School of Medicine, University of London, "As the genetic secrets of muscle growth unfold, so the prospects for genetically manipulating muscle fibres improve. While this is certainly a good thing for people suffering from muscle wasting, it holds a host of potential problems for the world of sport -- problems that could make steroid abuse passe."

Scientists at the University of Wisconsin in USA, have succeeded in injecting pure DNA directly into the muscle tissue of mice. Goldspink and his team are trying to understand why certain muscles contract more slowly than others. They are focussing on a giant protein molecule called the myosin heavy chain which plays a crucial role in muscle exhaustion and is centrally involved in the contraction of muscles.

The Barcelona Olympics heralded in high-tech in other areas too. The track made from a form of rubber sheet was the first in an Olympiad to meet the 1990 specifications of the International Amateur Athletics Federation. The track surface was a compromise between soft surfaces favoured by long-distance runners and hard surfaces preferred by sprinters and jumpers. Apart from not assisting in performance of particular athletics, it is designed to prevent injury to the athletes. After Carl Lewis ran the fastest 100 metres and Mike Powell leapt to a new world record at the World Athletics Championships in Tokyo last year, tests showed the track was unusually hard. Sprinters and jumpers prefer harder surfaces because its reaction to forces imposed on it is greater. But long-distance runners at Tokyo finished with sore legs because of the pounding they received from the hard surface.

Two electronic systems also made their Olympic debut at Barcelona: a device to pinpoint winners in close finishes and an ultrasonic detector to measure wind speeds. Slit-Video, developed by the Japanese firm Seiko, takes upto 2,000 video images a second of the final 5 mm of the track through a slit about quarter the width of a hair. The images are stored in a computer and can be combined on a screen to appear like an ordinary photograph. The difference, however, is that the athletes are spaced out over time instead of over a distance. Vertical lines, with spaces equivalent to one-hundreth of a second, superimposed on the screen, help pick the winner in a close finish.

The system also has electronic sensors fitted into the starting blocks to detect false starts. It works by emitting a bleep in the starter's headphones if a runner starts within 100 milliseconds of the gun being fired, a response time not even the fastest sprinter can beat.

To ensure that records are not set while competitors are wind-assisted, a device known as the ultrasonic wind vector system was used at Barcelona. While previously wind speed was calculated from wind pressure monitored by anemometers, this device used pairs of piezoelectric transducers -- one to transmit ultrasonic pressure waves and the other to detect them -- to calculate and display the wind speed parallel to the track. The device operates on the principle that the time taken between transmission and detection of the pressure waves depends directly on the speed of the wind blowing between the transducers.