Caught in a logjam 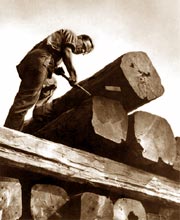 Major countries producing and consuming tropical timber have failed to arrive at an agreement to ensure the wood traded came from sustainably managed forests. Before it could even broach the issue, the July 26-30, 2004 meeting in Geneva, Switzerland, got caught in a logjam over the very scope of the agreement.

The 59 nations had come to an agreement earlier in 1994 (see box: Timber talks). The self explanatory July meeting was called the United Nations Conference for the Negotiation of a Successor Agreement to the 1994 International Tropical Timber Agreement (itta).

The debate at the meeting revolved around those articles in the 1994 agreement that covered objectives and definitions. The participants were divided into caucuses, which tended to be guided by their trade interests and failed to reach common ground.
For instance, the Philippines, India and Brazil wanted to retain the objectives of the 1994 agreement, while other nations wished to incorporate changes. Even the latter group was divided. While New Zealand, the us, Switzerland and the European Union (eu) preferred more general objectives, countries such as Norway and Malaysia wanted specific objectives and new additions.

Proponents of general objectives argued that these would give the International Tropical Timber Council, the highest decision-making body of the International Tropical Timber Organisation (itto), greater flexibility to implement the agreement. New Zealand, in particular, felt that general objectives would allow the itto to take on new environmental issues.

Norway wanted to include a provision requiring members to take effective measures against illegal logging. In a rejoinder, Indonesia maintained that the new objectives should address the obligation of consuming countries, like Norway, to provide technical assistance to combat the problem. Malaysia proposed elimination of subsidies in all timber-producing countries to encourage more equitable trade.

Another issue was the definition of tropical timber and what it covers. China, Korea, Norway and Switzerland wanted the words "non-coniferous tropical" deleted from the definition of tropical timber in itta 1994, to include coniferous wood. However, the eu objected to this and an agreement could not be reached. Even the description of what tropical timber covers remains contentious. In itta 1994, it included logs, sawn wood, veneer sheets and plywood. At Geneva, Japan wanted plywood replaced with "panel products and engineered lumber."

But none of this could be resolved: the definition of tropical timber, as in itta 1994, remains bracketed, pending technical clarification by the itto secretariat. Also no consensus was reached on the proposals made in the conference.

Various countries proposed the inclusion of new definitions for sustainable forest management, non-timber forest products, ecological forests, certification and tropical forest resources. These, too, have been left for the next round of negotiations to be held in Geneva from February 14-18, 2005. Let's hope the next time the members don't lose sight of the wood for the trees.

With inputs from Meher Ali