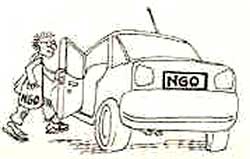 THE latest sector now to come under the scrutiny of the nation's premier investigative organisation _' 'the Central Bureau of Investigation (CBI) - are 61 NGOS. These were among'the 564 that had been blacklisted by the Council for Advancement of People's Action and Rural Technology (CAPART) in mid- 1995 for misappropriation of funds.

"While the list of these NGOs had been forwarded @ous by the ministry of rural development, we have been given to understand that legal measures for recovery of misappropriated funds have already been initiated by the ministry," states a CB1 spokesperson. According to him, the CB1 would be investigating the financial dealings of the NGOs.

The ministry, on its part, is reported to be considering the enactment of a special legislation to ensure recovery of funds allotted to organisations which are found to be involved in financial irregularities. The Union urban development minister, Jagannath Mishra, stated that a handful of truant NGos had tainted the otherwise clean-slated welfare sector.

"We had given time to most organisations to mend their mays. We see this action as a positive step that would ensure better implementation of rural developmental projects," he added.

cAPART has a budget of Rs 208 crore and funds nearly 7,500 NGOS in India. Of 2,000 NGos audited by cAPART, malpractices worth over Rs 15 crore had been discovered, with overall estimates suggesting misappropriation of much larger amounts. Critics, however, are quick to point out that while such 'steps may deter other NGOS from misusing funds, the actual malaise lay in the disbursement of funds.

- "It is a fact that the flow of aid is treated as a mere deal, with as much as 30 per cent of the funds lining the pockets of middlemen," said a Voluntary Action Network of India spokesperson. The general secretary of the Association of Voluntary Agencies for Rural Development went further, saying, 11 CAPART is better known for its nexus with corrupt NG0s and politicians."

Anuparn Mishra of the Gandhi Peace Foundation says, "With the number of foreign philanthropic organisations willing to pour money for poverty alleviation, and the close links that NGO@ tend to develop at the grassroots levels, some form of checks and balances are absolutelyneccessary."

To keep a closer tab on the welfare sector, the ministries of urban development and environment and forests have gone ahead with its decision to appoint a van mukhiya in every panchayat, in an attempt to curb the malady right in the grassroot stage.