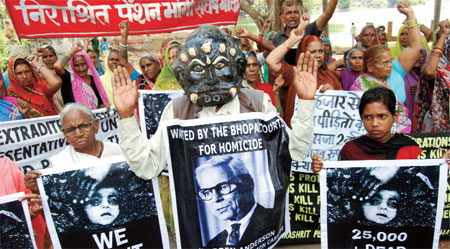 A DELHI court has allowed the Central Bureau of Investigation (CBI) to seek extradition of former Union Carbide Corporation chairperson Warren Anderson, the prime accused in the 1984 Bhopal gas disaster, from the US. Anderson, 90, has never faced trial in the case.

On March 23, while allowing CBI’s plea to extradite Anderson, chief metropolitan magistrate Vinod Yadav said, “Considering the entire facts ... and sentiments of the disaster-hit people, I deem it appropriate and in the interest of justice that he be extradited.” CBI had filed a 33-page application before the magistrate, stating that Anderson “is criminally liable to stand trial in India.

It would be a travesty and miscarriage of justice if he is not brought before the court of law in India”. The Ministry of External Affairs will carry out the extradition. India had approached the US for extradition in 2003 but Washington rejected the plea in 2004 (see ‘Beyond Bhopal: incentive for unsafe industries’, Down To Earth, July 1-15, 2010).

But, “CBI is not prepared to carry out the extradition”, says Rachna Dhingra, an activist with non-profit Bhopal Group for Information and Action. “This could be a hurried step by CBI before the meeting of a group of ministers (GoM) on the case,” she adds.

The GoM, Dhingra is referring to, is chaired by Home Minister P Chidambaram. During its March 24, meeting the GoM gave an in-principle approval to construct a memorial for the gas tragedy victims at the disaster site once it has been cleared of 340 tonnes of toxic waste.

“There was supposed to be a proper assessment of the site followed by a clean-up. But nothing has happened,” says Abdul Jabbar, convener of Bhopal Gas Peedit Mahila Udyog Sangathan. But Madhya Pradesh minister for Bhopal Gas Tragedy Relief and Rehabilitation Babulal Gaur says, “There are trees and cattle at the site.

They are fine. There is so much bad publicity regarding waste at the site… everything is fine.” He, however, did say disposing of the toxic waste was a problem since the dumping site is not yet finalised. GoM also gave an in-principle nod for a Rs 500 crore fund for improving medical facilities at a hospital set up for the victims of the world’s worst industrial disaster.