Hale-Bopp, the brightest comet of this century, promises to shed new light on the birth of the universe 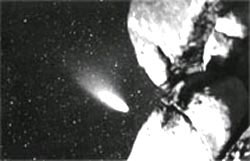 astronomists across the world are agog over the comet Hale-Bopp, as during its current run over the Earth, it is spewing tonnes of organic chemicals which could have been the building blocks of life. It is after nearly 4,000 years that Hale-Bopp, a 40-km-wide cosmic snowball of ice and dust, is making its appearance. The brightest comet to enter the solar system, Hale-Bopp came closest to the Earth on March 22, at a distance of about 200 million km away. "Most of what we are seeing is ice, but there are plenty of hydrocarbons and organic molecules that you would need for the genesis of life," said Harold Weaver, American astrophysicist at Johns Hopkins University who specialises in comets.

The comet can now be easily spotted with naked eyes for about four hours every night until June, when it will probably begin to fade away. The last time it was visible from the Earth was around 2,000 bc.The comet was discovered in 1995 by two American astronomers Alan Hale and Thomas Bopp, independently but within minutes of each other. Hale-Bopp is now heading towards the Andromeda constellation.

This month, it comes to its full bloom and displays a bright head and a gossamer like long tail. Sky watchers and astronomers are assembling everywhere to observe, study and photograph the comet of the century. On March 9, when there was a solar eclipse in western Asia, for a period of 2 minutes and 50 seconds, the comet could be distinctly observed during its streak across the morning sky. The comet is roughly three to four times bigger than Halley's comet, with a tail estimated at 16-32 million km in length.

The very fact that that this comet was first spotted at a distance of seven and a half astronomical units (au - 1 au = mean distance of the Earth from the sun) from the sun gave rise to the speculation that it must be intrinsically very bright and very big - may be 10 km or even bigger. Michael Mumma, a comet expert at the us-based National Aeronautics and Space Administration (nasa), said a third of the comet was made of ice. By studying the light spectra of the comet, scientists can determine its chemical composition. This will help them to understand how the planet formed from the condensation of a massive cloud of primordial dust particles that existed then. A number of new chemicals have been detected on Hale-Bopp, including alcohol and some of the organic constituents of living organisms.

"Hale-Bopp, as other comets, is an aggregation of ice, dust and chemicals, sort of a dirty snowball", that remains frozen in the deep cold of outer space, according to Weaver. It is only when the comet approaches the sun do the ices warm up and send geysers of material streaming away as the distinctive comet tail. But what makes Hale-Bopp different from other comets, is its size and the fact that never before have sophisticated astronomical instruments recorded details of a comet passing the sun.

Hurtling sunward at 54,000 km per hour, "One of the major new findings from Hale-Bopp is that all of these chemical molecules are erupting from the comet due to heat from the sun," said Weaver. Scientists have found that the surface of the comet is extremely violent, with vents opening up as they are exposed to sunlight for the first time. In India, the comet is being monitored by the Physical Research Laboratory, Ahmedabad, Indian Institute of Astrophysics, Bangalore, and the Nainital observatory in Uttar Pradesh.

In White Stands Missile Range, New Mexico, scientists are firing four nasa-funded arrow like rockets, beyond the outer reaches of the atmosphere to help solve the mysteries of the Hale-Bopp comet and possibly yield clues about the birth of the universe. These rockets will collect data on the comets composition, including gas emissions and dust particles, which could tell scientists the comet's age and origin. "When we are studying a comet like this, we are getting some real clues about how the conditions were like at the formation of the universe. It is like a time machine going back four and a half billion years," said Alan Hale who was there at the time of the launch of the rockets.

If the telescopic images do show that the comet contains the noble gases neon and argon, they could help determine where and when the comet was formed because the gases form under certain conditions, said James Green, the university of Colorado astronomer conducting the experiment.