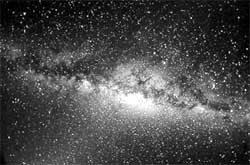 astronomers have found a black hole in the Milky Way, far closer to home than expected, an unexpected bonus that will help them carry out many scientific inquiries in this celestial lab.

The super dense black holes are strange celestial bodies. They are extremely dense objects, so dense that the gravity of the mass does not let even light escape. They follow as a direct consequence of the theory of gravity and scientists till date have only modeled and projected that they exist in our universe. And before this discovery there was no actual verification of their presence. Now, a group of scientists might have the clinching evidence for their existence in the center of our galaxy. F Baganoff of the Massachusetts Institute of Technology, usa, and his team have reported detecting an x-Ray pulse coming from the center of the galaxy. The properties of the pulse make it very likely that they are caused by a massive black hole sucking in matter.

Though black holes are 'black' -- they do not allow light to escape from them -- there are many other ways of spotting them. Because of their gravity, any star or object close to them is sucked into the black hole. This accretion of matter from a nearby star causes the matter falling in to give out radiation in the form of x-rays and radio ways that can be detected. The center of our galaxy, a region known as Sagittarius A, has been known to be massive in size. The mass concentrated in the region is about 2.5 million times that of the Sun. On October 26, 2000, this region in the constellation of Sagittarius A gave out a brief pulse of x-rays. The pulse lasted for about three hours with a ten-minute gap. The orbiting x-ray observatory, Chandra, detected this pulse. Baganoff and his team studied the properties of the pulse. The x-ray flare could be explained by the fact that a comet or some other object was falling violently into the black hole. From the fact that there was a gap of about ten minutes, they calculated that this was the time taken by the pulse to travel through the region before emerging out. From this, they could calculate the extent of the region to be some 15 million kilometres across.

This kind of mass concentrated into a 'small' region can only be a super massive black hole. But to be absolutely sure, the team needs to look at the source for a much longer time and also use radio telescopes to detect a radio emission at the same time as another x-ray pulse from the region ( Nature , Vol 413, p43).