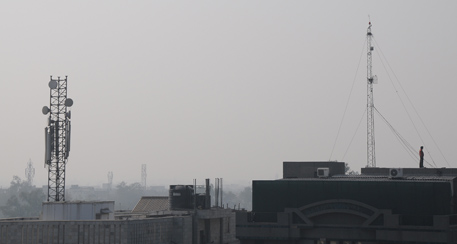 The writing on the wall is clear. The electromagnetic radiation (EMR) emitted by mobile phone towers are interfering with biological systems in more ways than one. It is affecting birds and bees, an indication that doesn't augur well for other species. What is also clear is that there aren't enough studies in India to show the impact of EMR on flora and fauna and that such studies are required.

These are the findings of a report on the possible impacts of communication towers on wildlife, released by the Union Ministry of Environment and Forests (MoEF) in October.

The report has been prepared by an expert committee that was constituted on August 30, 2010, by the ministry in response to a question in the Lok Sabha on the ill-effects of mobile towers on birds. This report buttresses the finding of an inter-ministerial committee, comprising officials from the Department of Telecommunication, Indian Council for Medical Research, Department of Biotechnology and MoEF, that was released earlier this year.

The committee that was supposed to review all the studies done so far, Indian and international, recommended that EMR should be treated as a pollutant and that more studies on humans and especially wildlife need to be carried out in India. The report suggests that studies on impact of cell phone towers and EMR on birds and other wildlife are almost non-existent in India.

The report concludes that EMR should be treated as a pollutant, especially as it is a potential cause for the decline of animal populations and deterioration of health of plants and humans living near radiation sources, such as phone masts. EMR is responsible not only for the declining number of birds, especially sparrows, but is also linked with an unusual phenomenon in bees known as ‘Colony Collapse Disorder’ when bees begin to vanish from their hives.

The report points out that since pollution from EMR is a relatively new environmental issue, there is a lack of established standard procedures and protocols to study and monitor electro-magnetic fields. In addition to the gap areas in research, the necessary regulatory policies and their implementation mechanism also have not kept pace with the growth of mobile telephone services.

The report states that the guidelines on exposure limits to EMFs need to be refined since the ICNIRP (International Commission on Non-Ionizing Radiation Protection) Standard, currently followed in India, is based on only thermal impact of radio frequency and is dismissive of current epidemiological evidence on impacts of non-thermal nature on chronic exposure from multiple towers.

The executive committee was supposed to suggest possible mitigation measures and formulate guidelines for large-scale installation of mobile towers in the country.

The committee thus, recommends that precautionary principle should prevail and that Indian standards on EMR matches the best in the world. The expert committee also recommends that ecological impact assessments be made mandatory for transmission towers and base stations, with standardised protocols and parameters.

A couple of states like West Bengal and Delhi have in the past recommended similar guidelines for the installation of the mobile towers. In May this year, the Bombay High Court had asked the state health department and the Maharashtra Housing and Area Development Authority (MHADA) to submit rules pertaining to the installation of mobile towers in the state. In June, the Punjab and Haryana High Court had ordered the government, to issue warnings of health hazards of mobile tower to the public.
Web Specials Web Specials Web Specials Union Ministry of … stress sleep disorders ringxiety (phantom … reduction in sperm … pollutant non-thermal memory loss long-term impact of … International … endocrine disruptions Electromagnetic … congenital deformities cell phone towers brain tumors
SUPPORT US