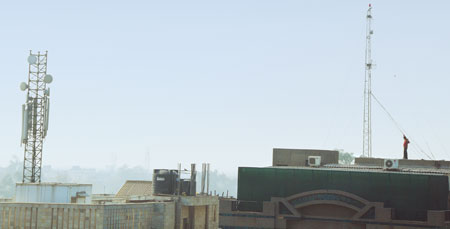 AN EXPERT committee, appointed by the Maharashtra government to study the effect of mobile phone towers on public health, has recommended a ban on these structures near schools and hospitals, and restricted access to rooftops of buildings having such towers.

The panel, headed by additional chief health secretary, was set up in March following public pressure. Among others, it has representatives from the Bhabha Atomic Research Centre and Tata Memorial hospital.

A senior official said these are draft recommendations and the final report would be submitted later. People have been demanding removal of the towers, claiming radiation from them is causing cancer and skin diseases (see '60 people battle giants, Down To Earth, February 15-30, 2010).

The towers are usually installed without permission and later regularised by paying a penalty of Rs 5,000. A Mumbai municipal official said a structural stability certificate and a noobjection certificate from the building society is all that is needed to install a mobile tower. "The rules do not take into account possible health hazards," he conceded.

Chief minister Ashok Chavan had admitted in the Legislative Assembly that over 50 per cent of the mobile towers in Mumbai and Thane are illegal. There are 3,489 mobile network towers in Mumbai; only 1,861 are legal. Rajeev Satoskar, a health expert from G S Medical College in Mumbai, said research on the effect of such towers on health is in its infancy. As of now, the Department of Telecommunication at the Centre has adopted the International Commission of Non- Ionizing Radiation Protection (ICNIRP) guidelines. Service providers flout these guidelines by increasing signal strength so that they have to use fewer towers, said Satoskar.

Girish Kumar, professor of electrical engineering at Mumbai IIT, said India's safe radiation limit for mobile towers is also harmful. "We have allowed 4.5 Watt per sqm as the safe limit. Russia has put a limit of 0.02 Watt and Germany 0.001 Watt," he said. "You know what 4.5 Watt means? It is same as putting someone in a microwave for 19 minutes a day," Kumar said. The elderly and women at home are more at risk, he said while adding he had sent his findings to the telecommunication department. Kumar has developed a handheld device for measuring radiation.