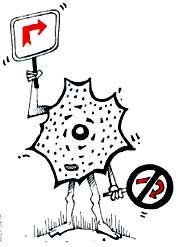 THE building of a multiccllular organism requires an intricate network of signals going to and fro between the cells that constitute the organism. Traditionally, these signals are studied in terms of the effects they cause, in terms of their molecular constitution and in the manner in which they are sensed. The entire approach presupposes that the important questions concern only signal, receptor and intracellular changes that occur as a consequence of the signal binding to its receptor.

However, as we know all too well from our experience of the most com- mon form of communication between human beings, speech, a crucial aspect of signalling has to do with how the signal varies in time. To take a simple example: depending on how it is modu- lated, the same set of sounds can convey a question or an answer. Unfortunately, temporal patterning in multicellular signalling is a relatively unexplored sub- ject. One reason for this neglect is that it is not an easy matter to measure rapid variations in the concentration of a chemical that may be present in very tiny amounts to begin with. Another is that most biologists prefer to spend their time on the molecular basis of signalling, which is a more glamorous area than signal patterning.

Cornelis I Weijer and his colleagues at the University of Dundee, UK, are one exception to this rule. Weijer has taken advantages of the several attractive features found in the amoebae Diciyostelium discoideum to study the fine details of temporal signalling between cells. In this he has been aided by two factors. One, Diclyosteliurn amoebae interact with each other by means of clock-like periodic signals of a known chemical, cyclic Amp. Two, cells respond to an external source of cyclic AMP by moving towards the source and simultaneously relaying the signal.

Because of the relay, waves of cyclic AMP travel outwards from a source. And due to this movement response, the outwardly propaAating waves of cyclic AMP elicit inwardly travelling waves of cellular motion that cause amoebae to aggregate. The entire process can easily be photographed and analysed in a video apparatus. The speeds involved are small, of the order of one-hundredth to one-tenth of a millimetre per minute and the period between two signals is large, about five minutes, so the phenomenon needs to be artificially speeded up during photography (Developmental Biology, Vol 181).

Weher's latest observations show just how subtle the effects of altered signalling can be. 'the object of the study is a mutant named G45v, that is believed to remain in a permanently sensitive state to the cyclic AMP signal (in contrast to the normal, parental, strain that gets temporarily desensitised after receiving a signal). Weijer and colleagues report that the aggregation process is deranged in the mutant. In the parental strain, the outwardly travelling Waves Of Cyclic AMP that initiate aggregation get transformed to screw-shaped waves. These also start from the centre, which now adopts a nipplc-like form at its tip after the aggregation is completed. The screw waves direct extensive rotational and upwarddirected movement of amoebae up the axis of the slug. One consequence is a clear spatial segregation of the two cell types that go on to shape the terminally differentiated stage of the lific,cycle of Diciyostelium.

In G45v, everything appears to procced as usual until the end of aggregation. After that, instead of a screwshaped upwardly moving wave of cellular movement, what one finds is a series of waves going round and round the centre in a circular fashion. As this happens, a dip appears in the centre of the aggregate, which gradually disappears altogether and causes the aggregate to take on a ring-like appearance. 'I he ring finally breaks up into a number of small, terminally differentiated structures instead of one large structure as usual. The ultimate (meaning, evolutionary) consequence of the mutation appears to be a reduction in the overall size of the final stage. Correlated with aberrant wave propagation and probably causally related to it - the spatial segregation of cell types that is normally a corollary of the appearance ol'the nipple-shaped tip, fails to occur.

The most important implication of this study is that the defect, which can have a subtle but an important effect in the signalling machinery would never have been perceived if one had struck to the measuring techniques of conventional biochemistry. What still remains to be done, however, is to establish a definite link between the immediate consequence of the mutation at the molecular level and altered signal dynamics.