Post-communist Siberia has hardly any paved streets, but is brimming with cellular phones and $40,000 jeeps 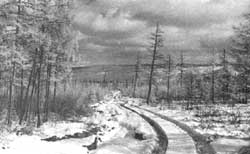 THE dawning of the free market era in Russia has plunged Siberia into a vortex of contradictions. Although the region is a treasure house of natural resources such as diamonds, gold, silver and oil, its mining towns - established by the Soviets to harness the abundant wealth - are on the road to oblivion. Running water is unheard of in homes in central Siberia, yet affluent young men are known to hit the unpaved roadways in $40,000 jeeps. Despair looms large in Siberia, even as tempting new market opportunities beckon from the horizon.

Siberia's plight is epitomised by Yakutia, which has the world's biggest coal fields, much of the oil of the former Soviet Union and a good bulk of its diamonds and tin reserves. Yet food is 3 times more expensive than in Moscow and development has flat-tyred to a standstill. In Yakutsk, the largest city in Yakutia, there are hardly any paved streets, water pumps are the norm and the majority of people live in wooden outhouses. The conditions are so bad that many residents are desperate to leave. "People have been sent here with promises that have not been kept. Every trained person who can get a job somewhere else is leaving," says Yakutsk mayor Aleksei Tormosov.

The Adjustmeni to new realities has been particularly painful for those in north Siberia, a vast expanse of tundra and permafrost. Extra pay, vacations, subsidised food and guaranteed pensions lured people to this area, which had thousands of small mining towns with nearly I I million residents just 2 years ago. With the collapse of the communist regime, however, the dreams turned sour and at least I mil hoe resbdent, are estimated to have fledOfficials, fFear dw anodber I milhon will leave next vrar. Verkboyansk, 644 km north of Yakutsk, dns;p4aKs all the signs of a dercha town. 2 haif-built day cam centre, an emptv space for a proposed s;choot, mad a pde of bncks whew a bakery was to be build.

Yet Siberia has lost none of its attraction tor evurepreneurs- The possibility of expo Y2kutsk's famed dia- mond, gold or phosphate reserves attract& pcopk m drovv& And sateflue and ceflular telephones have made an appearance ia Khabwovsk near the Manchurian border.

However, government his done fittle to boom Siberia's economyAlthough the Russian authorities have pledged tax breaks and sub6idies; for business, htdc action has been takenThis year, the Russian parliament sharply cut sub6idies to, the northern territories by nearly haff - from S4_75 billion to, $2.75 Hilion. For the people of Siberia, this is worse than terminal frostbite.