food and environmental safety in the country has been stoked with the centre's decision to ease the quarantine norms for 5.5 million tonnes of imported wheat. The first tender for this was released on February 20 this year; the latest on September 5. Three union ministries have bent rules to facilitate the import -- ministry of health and family welfare, ministry of consumer affairs, food and public distribution (moca and pd) and Ministry of Agriculture (moa). The relaxation, however, has increased the import price by 35 per cent. This has upset consumer activists and scientists within moa.
The new quarantine rules have permitted the presence of two fungal pathogens -- ergot (Claviceps purpurea) and dwarf bunt (Tilletia contraversa) in the imported wheat shipments. The quarantine norms were relaxed with an amendment to Clause 14 (1) of Schedule vi of the Plant Quarantine (Regulation of Import into India) Order 2003, which requires wheat grains imported for consumption or processing from any country to be free from the pathogens. This amendment will remain valid till December 31, 2006.

The Directorate of Wheat Research, (dwr), Karnal, a research body of the moa has strongly opposed this. Officials at moa say that since the import is solely for consumption, there is nothing to fear. They say that the fungi are a threat only in temperate Europe. dwr scientists, however, say that most of Indian wheat is liable to fungal attack since it is grown under severe winter conditions. "These fungi, which are not present in India, can grow to epidemic proportions and destroy large tracts of wheat crop," says a senior scientist at dwr. To recall, the deadly 'stem rust' entered India during the Mexican wheat introduction during the 'green revolution'.
The moca and pd has also relaxed the prevention of food adulteration (pfa) rules, 1955. Consumer lobbies have strongly opposed this. R Desikan, a consumer activist, says that the new norms would permit the presence of certain pesticides 100 times more than normal (see table Too tolerant). Certain dangerous toxins like the lethal Deoxynivalenol produced by soil fungi, poisonous plant seeds like Argemone mexicana and Lathyrus sativusa, as well as seeds of an invasive weed Bromus rigidus will find its way in. 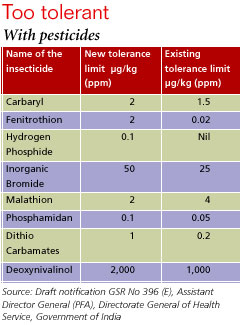 The fumigation requirements have also been changed allowing the carcinogenic aluminium phosphide in place of methyl bromide, which was being used earlier. The change has been promulgated at the behest of us wheat lobby's export-market development organisation -- us Wheat Associates. Methyl bromide is considered as ozone depleting, and thus banned in the us.

K B Chaudhury, executive chairman of the Congress party's farmer body, Bharat Krishak Samaj, says, "The above relaxations will benefit subsidised farmers of the us, Europe and Australia." While 100 kg imported wheat costs Rs 1,100, Indian farmers are paid Rs 700 as minimum support price, which decreases with lessening of quality standards.
Sharad Pawar, Union agriculture minister, says the new norms will buy wheat cheaply and adequately. In spite of the relaxations, bidders have quoted a much higher price for the latest tender. The average price range is us $230 to us $267. This is much higher than the earlier import price of us $179. Besides, not a single bidder has promised to provide 1.67 million tonnes floated in the latest tender . "The reason behind this is the September 5 government decision to allow private traders to import wheat. Since most exporters are based in India they would prefer to bypass the government route," claims Sanjay Agarwal, New Delhi-based commodity analyst. Over and above, the slackening of norms will affect India's position at the World Trade Organization, where it is fighting for stricter quarantine norms for agricultural produce trade.