Workers in other states could take cue from Karnataka

A recent judgement of the Karnataka High Court asking the Central government to pay arrears to workers employed under the rural job guarantee scheme is posing a big challenge for the Centre.

The court order of September 23 quashed the Centre's January, 2009 notification,  fixing the wage rate for agricultural labourers in Karnataka under the Mahatama Gandhi National Rural Guarantee Employment Scheme (MGNREGS) at Rs 82. The court held that the appropriate wage rate of Rs 119.42 (the state's minimum wage rate) should be paid with retrospective effect from January 1, 2009.

If the Centre abides by the decision, it would have a ripple effect as other states where wage rate paid under MGNREGS is less than the state wage rate. These states, too, would demand back wages. An official in the ministry of rural development said, “We are still weighing the options and it’s too soon to comment whether Central government will appeal against the order or not.” The Sonia Gandhi-led National Advisory Council (NAC) seem to be at odds on the issue.

NAC member NC Saxena says since the high court judgement is just for Karnataka, arrears should be paid to MGNREGS workers in the state only. “The final decision, however, is with the Centre,” he says.

However, National Advisory Council member Harsh Mander differs. He says the high  court judgement would form the basis for application in a wider area. “I don’t know whether the ruling will be binding across the country, but activists from other states, too, would demand arrears, which is justified,” says Mander.

The high court order says the Central Government cannot fix the wages for MGNREGS workers at less than the minimum wage fixed for agricultural labourers by the state government.

The Court said the wage rate notified by the Centre shall not be less than the minimum wage fixed by the state government under Section 3 of the Minimum Wages Act, 1948, for agricultural labourers applicable to that area. The Karnataka high court has given three months to the Centre to appeal, but sources in the ministry of rural development say that they are unlikely to challenge the high court directions.

One of the petitioners in the case, Guttedar V Malikayya, Member of Legislative Assembly of Karnataka says that inflation had forced people to file the petition in 2009 when the Centre had fixed the wage at Rs 82 under MGNREGS for the state. “The amount was pittance and we are happy that the court has directed the Central government to pay arrears to the labourers.” He added that the real victory would be when these MGNREGS workers get their dues and the judgement helps such workers across the country. 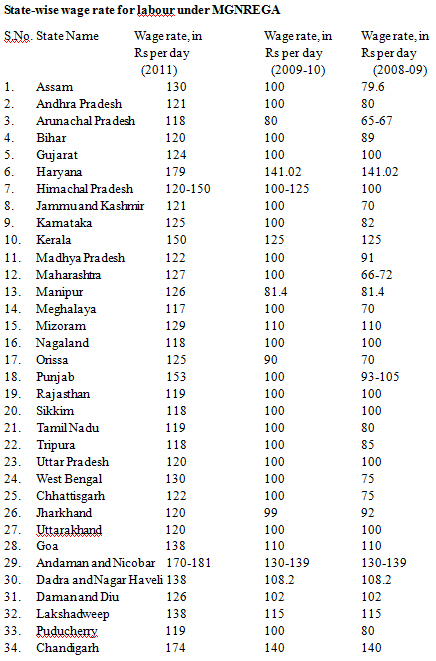 Officials from the ministry of rural development say the ministry had revised the wage rates for MGNREGS workers this year only and that the wages are either matching or more than the state minimum wage rates in most of the states (see 'State-wise wage rate for labour under MGNREGS). He adds that the ministry is yet to calculate the amount that would have to be paid as arrears and what would be the implications if the judgement is obeyed.