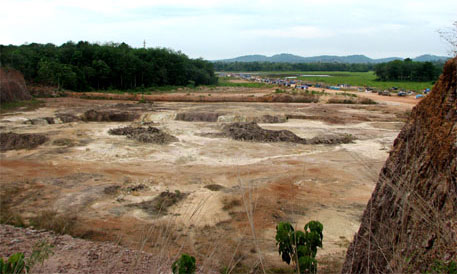 The Union environment ministry recently approved fresh environmental impact assessment (EIA) study of the Rs 2,000 crore Aranmula International Airport, a proposed private airport project in Kerala’s Pathanamthitta district. The move may lead to revival of the airport project though the National Green Tribunal (NGT) stayed its construction in May 2014.

The new EIA study will be conducted by SGS India, an inspection and certification company.

The Expert Appraisal Committee (EAC) of the Union environment ministry, which met in New Delhi on April 24, permitted KGS Group, promoters of the project, to go ahead with a fresh EIA while considering their plea in this regard. The EAC rejected the arguments that the proposed site was not suitable for the airport project.

Last January, the MoEF had sought details from state government regarding the project. In a written communication to MoEF, the Kerala government informed that it has taken 10 per cent stake in the project and its representative would be appointed in the director board. The government did not inform the EAC anything regarding paddy fields and water bodies in the aquired land.
It’s in the wake of this report that the EAC  considered KGS Groups' appeal for a fresh EIA

The Union environment ministry had cleared the greenfield project in November 2013.

Protests against the airport

A strong agitation was started by local residents, green activists and political parties, including the Bharatiya Janata Party’s (BJP) Kerala unit, against the airport project after it was first proposed.

The protestors accused the KGS Group of taking paddy fields and wetlands by violating the Kerala Conservation of Paddy Land and Wetland Act, 2008, the Kerala Land Reforms Act, 1963, the Environment (Protection) Act, 1986, and the Land Acquisition Act, 1894.

Local residents thought the proposed project, once it comes up, would obstruct entry to the well-known Aranmula Parthasarathy Temple and destroy its sanctity.

Activists pointed out that according to rules and regulations there should be a minimum 150-km distance between new and existing airports. The Aranmula airport, however, is only 110 km from the Thiruvananthapuram airport, they allege.

The South Zone bench of the NGT had cancelled the clearance given to the airport project and restrained the KGS group from carrying out any construction work or other activities at the site. The tribunal had concluded that the EIA report on the airport was not prepared by a competent agency. Further, it had held that the public hearing conducted for the project was in violation of the mandatory provisions of the EIA notification of 2006.

The KGS group moved the Supreme Court against the NGT's verdict, arguing that the project site “is not a wetland, but only a paddy land which is now waterlogged, degraded and unfit for paddy cultivation”.

The promoters also blamed a sustained local rebellion by “meddlesome interlopers” as a reason for the project not taking off. This has come in the way of “hundreds of thousands of people” getting jobs and the coming up of a world-class airport at the site, the promoters argued.

However, the green bench of the Supreme Court found no merit in the contentions of the promoters in November last year and upheld the NGT's verdict.

The verdicts of NGT and the apex court were celebrated by local residents, green activists and political parties. Undaunted, the KGS Group submitted a new application to the Union environment ministry last week, seeking project clearance. In its argument, it pointed out that there are no cultivable paddy fields in the vicinity of the proposed site in Aranmula. The group also said that the NGT had denied clearance to the project due to a “misunderstanding”.

Activists to appeal to PM

Social, environmental and political activists met in Thiruvananthapuram recently at the call of well-known poet B Sugathakumari and prominent Gandhian G Gopinathan Nair. They decided to send a petition to Prime Minister Narendra Modi, with help from the Kerala unit of the BJP, against the environment ministry's decision to give permission for conducting a fresh EIA. They also decided to revive paddy and vegetable cultivation as a mark of protest against the Centre's decision.