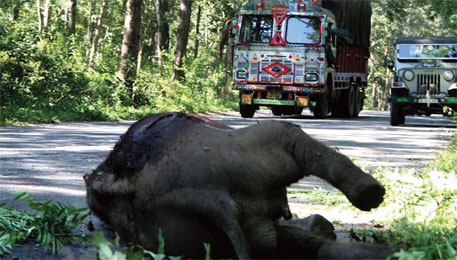 AT LEAST 220 animals and birds died in road accidents between 2004 and 2008 in Karnataka’s Bandipur Tiger Reserve. Sixty-five per cent of these accidents occurred at night, states a study conducted by Wildlife Conservation Foun-dation (WCF), a Mysore-based non-profit. But the Union environment ministry wants the ban imposed on night traffic between Kerala and Karnataka to be withdrawn.

The ministry has asked the Karnataka government to prove that its ban on night traffic on the two highways that pass through the reserve is in “public interest” as well as for “wildlife conservation”. In a September 26 letter to the Karnataka chief wildlife warden, it has even threatened to move the Supreme Court for restoration of traffic.

Karnataka banned traffic between 9 pm and 6 am on the two highways in March last year after a high court order, which said a large number of animals, including tigers and elephants, were killed in accidents. The court also observed that noise and glare were driving animals away from forests, leading to man-animal conflict. “After the ban, wildlife deaths have come down by 80 per cent,” says D Rajkumar of WCF.

But the government of neighbouring Kerala challenged the ban in the apex court arguing it will “seriously” impact the state’s economy and affect hundreds of thousands of people. The National Tiger Conservation Authority (NTCA), which falls under the ministry, has strongly opposed night traffic. It has described Kerala government’s stand as “unimaginable and shocking”. On an average, 30 vehicles move on the two highway stretches every hour between 8 pm and 6 am. Bandipur, among the first national parks to be declared a tiger reserve, has a high density of the wild cat. It is also a part of the Mysore Elephant Reserve.

In its appeal, the Kerala government has said the highways are used to transport perishable items like vegetables. “People from Kerala are facing problems. We have requested Karnataka to reconsider the ban,” says Jagdish Kishwan, additional director general of forests (wildlife) in the ministry.

Karnataka says emergency vehicles and state transport buses are allowed to ply during the ban hours. There are alternative routes too. It has argued that the inconvenience to people “is negligible compared to the ecological benefits of the night closure”.

In February this year, the NTCA told the apex court that the ban was in accordance with the National Wildlife Action Plan 2002-2016 and guidelines for preparation of Tiger Conservation Plan.

“The ministry should take up the matter with the Supreme Court to vacate the prohibition imposed by the high court and restore road communication between Karnataka and Kerala,” it says. Karnataka told the apex court the alternate route has a short stretch on the periphery of Nagarhole National Park. Its wildlife density is much less than Bandipur’s.

“This is a rare case where the state government is favouring wildlife conservation to minimise impacts of development, while the environment ministry, whose mandate is conservation, is doing the opposite,” says Sanjay Gubbi of Wildlife Conservation Society, a Bengaluru-based non-profit.

“Sand mining is prohibited in Kerala. Rice bags filled with sand were earlier illegally transported at night to Kerala from Karnataka,” he says. Similarly transportation of cattle to slaughter houses in Kerala is also carried out through the highways. “Night closure of highways has hindered this. Other similar lobbies are also working overtime to get night closure lifted,” Gubbi adds.