The Union ministry of shipping has filed an affidavit in the Supreme Court, seeking implementation of the Sethusamudram project. The project envisages a navigational route around India's southern tip by breaching the Ram Setu or Adam's Bridge made of limestone shoals, connecting Palk Bay and Gulf of Mannar. In the affidavit, the government also rejected report of the Supreme Court-appointed committee headed by environmentalist R K Pachauri, which had suggested an alternative route alignment to avoid damage to Ram Setu.

The case was scheduled for hearing on Tuesday. The Supreme Court adjourned the case till November, asking the main petitioner, BJP leader Subramanian Swamy, to reply to the government affidavit which has rejected Pachauri Committee report.

The shipping ministry's affidavit filed before the Supreme Court on Monday stated that the data provided by Pachauri Committee report did not support the blocking of the project. “The committee arbitrarily and contrary to its own studies has concluded that the project is not viable. The recommendation of the committee is not tenable and is not supported by scientific data and by environmental studies commissioned by the committee itself,” stated the affidavit.

But some of the recommendations of the Pachauri Committee report have  found acceptance. These are contained in the summary of the report on mitigation measures. “The summary report has provided detailed guidelines for mitigation, including after the project is constructed, fully suggesting the project will be green-lighted,” said the ministry in its affidavit. The grounds for rejection of Pachauri committee report was based on conclusions derived from the committee's own scientific studies, which MoS said was contrary to the conclusions. 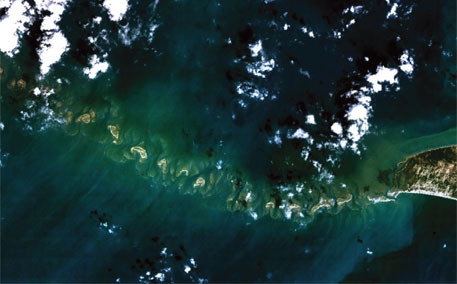 The ministry affidavit also addressed Tamil Nadu government's opposition to the project, in which it earlier held that the project was ecologically and economically unviable. The affidavit stated that Rs 766 crore has already been spent on the project, and asserted it will generate more employment. “The project has strategic, navigational and socio-economic benefits and judging the economic viability of the project merely by the internal rate of return — which reflects only the commercial viability — may not be appropriate,” the affidavit said.

The affidavit also referred to concerns raised by Tamil Nadu state government as well main petitioner about the project harming the cultural rights of the people (Ram Setu, according to mythology, was the bridge raised by Lord Ram's army to cross over to Lanka). It stated that archaeological survey of India had already conducted a study in 2007. “The committee of eminent persons constituted in 2007 has exhaustively studied the case for and against the project,” the affidavit said, while adding there was no need to conduct any further studies as no evidence has been found of the Ram Setu being a monument of cultural significance.

Sethusamudram Shipping Canal Project and the unconsidered high risk factors: Can it withstand them?