Conditions for restoring clearances not spelt out 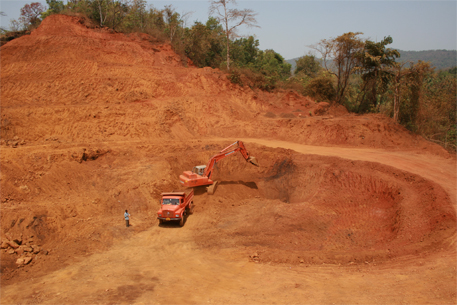 The Union minister of state for environment, Jayanthi Natarajan, on Wednesday announced suspension of environmental clearances of all the 93 mining leases in Goa. Natarajan made the announcement at a press conference in the state's capital, Panaji.

Natarajan was visiting the state to clarify the position of her party on the recent Rs 1.86 lakh crore coal scam unearthed by Comptroller and Auditor General of India. Natarajan said that her decision to cancel the environmental clearances of the 93 mines operational in the state is a fallout of the report of the Centre-appointed Shah Commission. The commission found huge irregularities in management of overburden dumps which were used for mining minerals, causing widespread ecological damage. It found that iron and manganese ore worth Rs 35,000 crore was exported illegally from the state to countries such China under the pretext of excess dump handling. The conditions for applying for restoring the environmental clearances are yet to be spelt out by the minister.

State had suspended mining only temporarily

Natarajan's announcement comes soon after Goa temporarily suspended mining of iron and manganese ore across the state. In view of the Shah Commission report, the Union ministry of mines had written to the principal secretary (mines) of Goa, asking the state to stop all the mining activity. “The state should restrict removal of mineral from dumps located outside the lease areas till an appropriate mechanism is evolved and Central government approval is obtained in mining plan on such dump removal activity, in order to ensure compliance of the recommendations of Shah Commission of Enquiry,” stated the letter sent on September 7.

Thereafter, on September 9, principal secretary R K Verma issued a notification to halt all the mining activity in the state. According to the state mining department, the operations have been halted to check the accounts and financial details of all the mining lease holders.

Goa has 93 operational mines in the existing 337 mining leases; 55 per cent of the iron-ore exported from India comes from Goa.

The Shah Commission found that 42 leases were operating illegally in the state and causing damage to pristine forests. A total of 2,796.24 hectares of forestland has been encroached upon; of this 578.42 ha was being used by miners for extracting minerals. The Commission also found large difference between ore production permitted and that being actually produced from 2008 onwards. The extra production was being referred to as “ore retrieved from the old dumps” and exported illegally.

The report also pulled up the state mining department, Indian Bureau of Mines as well as the Union Ministry of Environment and Forests (MoEF) for favouring such mining.

Meanwhile, Goa’s state mining department ruled out that the halt in mining would cause any dent to the economy as the production is yet to start in these mines. “Due to monsoons, the mining activity was to start later in the month. We have already started the process of examining the accounts of the lease order, and accordingly action would be taken,” said an official.

In the Action Taken Report for Shah Commission, the ministry has stated that the Goa government was even previously asked to scrutinise the accounts for mining leases after the interim report of Shah Commission was submitted. “The ministry of mines advised government of Goa vide letter dated October 25, 2011, to ensure proper accounting of the dumps. Thereafter on July 2, this year, ministry had again requested the state government to carry out inspection of overburden dumps and their handling.” But nothing was done.