Centre wants lions to be relocated from Gir forest; Gujarat not keen 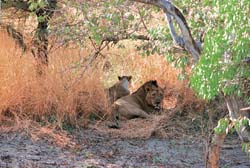 the centre informed Parliament on April 30, 2007, that it was necessary to relocate Asiatic lions from the Gir National Park (gnp) in Gujarat to save them from extinction. But the Gujarat government has shown no indication that it will back down from its stated position that it will not let the lions go.

The Union ministry of environment and forests (moef) has an alternate plan in this case. N R Meena, Union minister of state for environment, said moef will go ahead with its plan to release captive-bred lions from zoos into the Kuno Wildlife Sanctuary in Madhya Pradesh--the intended relocation site for gnp's lions. But experts are against this. "Lions are highly in-bred and held in conditions which dramatically change their behaviour.It exposes them to human presence and the diseases that they may be carrying," says Ravi Chellam, director of Ashoka Trust for Research in Ecology and the Environment, a Bangalore-based ngo. Also, he says, that lions in captivity are not familiar with the subtle behaviour that enables them to be efficient predators. "Release of captive lions defeats the very purpose for which translocation was proposed. It is to ensure long-term survival of lions in the wild," Chellam adds.

The Dehradun-based Wildlife Institute of India had done a detailed study on the feasibility of relocating lions to Kuno in 1993-94. The institute had presented its findings to moef and the governments of Gujarat and Madhya Pradesh in January 1995. It found Kuno to be the most suitable habitat because of its large forest area and diverse prey population. Preparing itself, Madhya Pradesh's forest department drafted their plan and budget to accommodate lions, which was ready in April 1995. But the Gujarat government refused to part with the lions saying lions were their 'exclusive heritage'. The forest department of the Gujarat government had earlier proposed that lions should be moved to the Barda Wildlife Sanctuary within the state but experts were sceptical of containing an entire population in one place fearing outbreak of diseases (see 'New conservation body for Gir lion', Down To Earth, March 31, 2007).