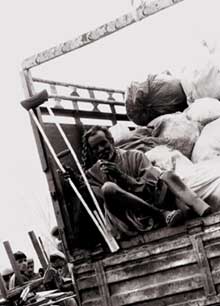 the United Progressive Alliance government has come up with a watered-down draft of a national rehabilitation policy after dumping an earlier version prepared by the National Advisory Council (nac) in December 2005. Civil society groups are incensed. They see the draft as another manifestation of the centre's cloak and dagger tactics on the rehabilitation issue. The key deviations are on issues of enforceable rights and compensation -- for loss of livelihoods. The new draft substitutes policy statements rather than go with the nac draft's insistence on instituting legally enforceable rights.

The Union ministry of rural development put up the new draft for public comments on October 4, 2006. The public was given time till October 11 to respond a mere seven days as compared to the two years it had taken the government to revise an earlier rehabilitation policy.
The country's rehabiliatation policy has seen several twists and turns in the last two years. The Union government had come up with a rehabilitation policy in 2004, after immense pressure from civil society groups. But this policy faced severe criticism from the groups that had campaigned for it. Matters remained in limbo till December 2005, when nac with the help of several members of the civil society came up with quite a radical draft policy.

However, the upa government dumped this document in a meeting of a group of secretaries on May 2, 2006, and announced that it would come up with its own version prepared by the rural development ministry's department of land records. But while the department went on with this task, the Planning Commission asked its inter-sectoral committee on tribal affairs to commence work on another draft rehabilitation policy (see 'Dislocated,' Down to Earth, June 30, 2006). The committee has in fact been instructed by its parent body to continue work on its version of a draft rehabilitation policy even as the rural ministry studies the comments it has received on the draft.
Some civil society organisations have protested against this confusing process. "Usually civil society representatives and concerned individuals get at least 30 days to give their comments and suggestions to draft policies. For instance, the Union ministry of tribal affairs provided the public 30 days to give comments/suggestions on the Draft National Tribal Policy 2006. Providing merely seven days for comments on the draft is completely unjust and unacceptable," representatives of Equations, a Pune-based ngo, wrote to the rural development ministry. While it has paid short shrift to such concerns, the government has been more forthcoming with proponents of mega-projects. Their comments on the current draft were solicited well in advance, National Hydropower Corporation sources said.
Some organisations were able to come up with a critique, despite the short timeframe. "The nac draft had several principles that took into account the ground reality of development-induced displacement. The 2006 draft has borrowed some ideas and concepts of the earlier draft but it has discarded the key principles and components that have been repeatedly raised in drafts laid down by civil society groups and nac," note Manshi Asher and Rifat Mumtaz of the National Centre for Advocacy Studies, Pune, in one of the comments sent to the rural development ministry in the seven days allotted.