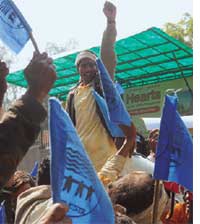 The Union environment ministry has threatened to revoke the environmental clearance to the Maheshwar dam on the Narmada river in Khargone district of Madhya Pradesh. On February 17, the ministry issued a show cause notice to the private company building the dam asking why work on the project should not be stopped. This was after the project affected people held a demonstration at the ministry’s gates.

The protesters said 80 per cent of the dam construction has been completed but there is no progress in rehabilitating people. The ministry, in its letter to Shree Maheshwar Hydel Power Corporation Limited, said the rehabilitation work has not progressed as stipulated in the environmental clearance given in May 2001.

“A rehabilitation package was to be submitted to the ministry in December 2001.

There is no word on the package till date,” said Alok Agarwal of Narmada Bachao Andolan. The ministry has given the private power company time till March 4 to reply to the notice. Earlier, in November 2009, Union minister of state for environment, Jairam Ramesh, had written to the Madhya Pradesh chief minister saying rehabilitation must keep pace with dam construction (see ‘Madhya Pradesh gets procedural rap’, Down To Earth, December 1-15, 2009).