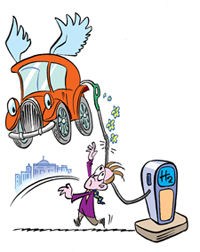 the Indian government has announced an ambitious plan to phase in a million hydrogen-fuelled vehicles by 2020. Seventy-five per cent of these vehicles will be two- and three-wheelers, according to the Union ministry of new and renewable energy (mnre). A hydrogen-based power-generating capacity of 1,000 mw and Rs 25,000 crore worth of hydrogen supply infrastructure has been planned to support this plan.

A steering group of the national hydrogen energy board, set up by the ministry in 2003, drew up the roadmap. It was headed by Ratan Tata, chairperson of the Tata Group, who said, "The national economy could be built on hydrogen as an alternative to fossil fuel. However, it may remain illusive for long-term because there are challenges to generate, store and deliver it."He was optimistic, though, that Indias strength in scientists and humanpower would make the clean fuel a reality, and the group focused on the need for research to make hydrogen viable.
India is investigating the potential of running internal combustion (ic) engines on hydrogen as opposed to fuel cell technology (fct) favoured in the West, which Indian industry believes will take longer to develop. M Raja of Tata Motors says that hydrogen can be used sooner in ic engines through adaptation of existing infrastructure.

The compressed natural gas (cng) programme in Delhi provides the immediate bridge for transitioning to hydrogen in India. A commercial hydrogen dispensing station will be commissioned in Delhi by March 2009 as a joint project of mnre and Indian Oil Corporation Ltd, dispensing neat hydrogen and cng-blended hydrogen as vehicular fuels for modified cng vehicles. The station will also have hydrogen generation capacity.

Another jointly-planned two-year project by the ministry and the Society of Indian Automobile Manufacturers will allow introduction of h-cng blends on a trial basis in existing cng vehicles.

Currently, hydrogen use in vehicles is at the demonstration stage, and the industry faces a skills shortage. While several new hydrogen energy and fuel cell r&d projects have been sanctioned, automobile experts are worried about intellectual property rights around the jointly-developed technologies. "Where do we draw the line?" asks Arun Jaura, who heads r&d at Mahindra and Mahindra.
Hydrogen is expensive to produce because it does not exist freely like other fossil fuels. Production in India is currently limited to the captive requirement of some industries and as a by-product in some chemical industries, and hydrogen production techniques from non-fossil fuels are still being developed. According to V Raghuraman, principal advisor at the Confederation of Indian Industries, "Hydrogen is a non-carbon fuel but it currently comes from carbon-based sources. We need a breakthrough in its production to meet the estimated demand by 2020."

Once hydrogen is produced, vehicles will need effective on-board storage. According to O N Srivastava, coordinator of the Centre of Advance Studies and Hydrogen Energy Center at Benaras Hindu University, "Hydrogen can be stored in gaseous form, as liquid or in the solid state metal hydride form, which acts as a sponge that soaks hydrogen." Srivastava has developed two-wheeler models in which hydrogen is stored in the form of metal hydride, which is safer and non-explosive at room temperature, but this method has poor capacity, making long-distance travel impossible. Other storage methods also have flaws; gas cylinders have poor efficiency, as hydrogen requires large storage volumes at very high pressure (400 atmospheric pressure or more), creating safety concerns. Liquid hydrogen requires cryogenic temperatures (below 150 degrees c) and is currently not viable for road transport.
The present cost of hydrogen is about Rs 240 per kg, which must come down by a factor of three or four for viability, according to the plan, while noting that the sharp rise in petrol prices would make hydrogen more attractive.

While industry has appealed for fiscal incentives, Montek Singh Ahluwalia, deputy chairperson, Planning Commission, is sceptical about subsidy-based programmes."Hydrogen is unlikely to become a plausible solution in energy security if it continues to be subsidised perpetually," he said. Experts say the government should aid the development of a market for hydrogen fuel and also support r&d.

Creating a market for these vehicles will be difficult. Regulatory interventions such as zero-emission laws will be needed. Given the dismal progress of conventional vehicle technology in India, the roadmap for a million hydrogen vehicles in 12 years brings little cheer. Concrete policy initiatives are needed; else, hydrogen vehicles will remain a pipe dream.