Chameleons use nanocrystals to change colour

Ever wondered how a chameleon changes its colour? Swiss scientists have found the answer after observing for years the panther chameleon of Madagascar (Furcifer pardalis), known for changing its hue from green to vivid red within a few minutes.

It was previously thought that such complex and rapid colour changes are due to gathering or dispersing of pigments present in the skin cells. But the scientists of the University of Geneva have disproved the theory.

“These colors are generated without pigments, via a physical phenomenon of optical interference. They result from interactions between certain wavelengths and nanoscopic structures, such as tiny crystals present in the skin of the reptiles,” Michel Milinkovitch, a professor at the University of Geneva, said.

These nanocrystals are arranged in layers that alternate with cytoplasm, within superficial layer of skin cells, called iridophores. The nanocrystals are evenly spaced in the cells and the spacing determines the wavelength of the light reflected, or the colour. For instance, when the nanocrystals are organised into a dense network, they reflect blue wavelengths. When the lattice becomes loose, say by about 30 per cent, it reflects yellow and red colours, scientists involved in the study said. Also, the chameleon’s visible colour is determined by upper layers skin cells, they added.

The reorganiasation of nanocrystals most likely occurs due to the shrinking or expanding of cells, said the scientists in the study paper published in journal Nature Communications. They now plan to explore how the chameleon rearranges the nanocrystals.

The scientists also observed that the change in colour and intensity of the hue depends on the social interaction of the chameleon.

For instance, when chameleons are in the relaxed state, they are cryptic and reflect blue or green colour so that they very well camouflaged in the tree. When excited, they reflect yellow and red colours.

However, the juveniles of both sexes and adult females are dull-coloured and cannot change colour as they do not have the layer of iridophores. The males are specially known for undergoing colour changes.

“If an adult male sees another adult male, it will change colour to become as visible as possible, for example, green or orange or red. This is display or social communication. If this does not scare the other male, they will physically fight, Milinkovitch told Down To Earth. A mature male also changes colour when it wants to attract a potentially mature female,” he added.

The scientists also demonstrated the existence of a second deeper layer of iridophores that protects the chameleon from heat. “These cells, which contain larger and less ordered crystals, reflect a substantial proportion of the infrared wavelengths,” states Milinkovitch.

The organisation of iridophores in two superimposed layers constitutes an evolutionary novelty: it allows the chameleons to rapidly shift between efficient camouflage and spectacular display, while providing passive thermal protection.

The scientists now plan to explore how the chameleon rearranges the nanocrystals. 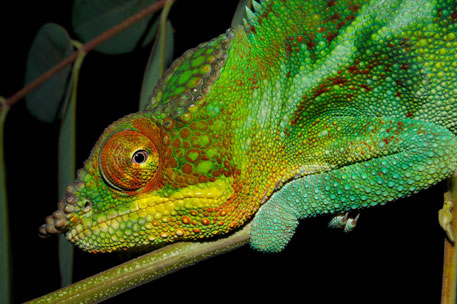 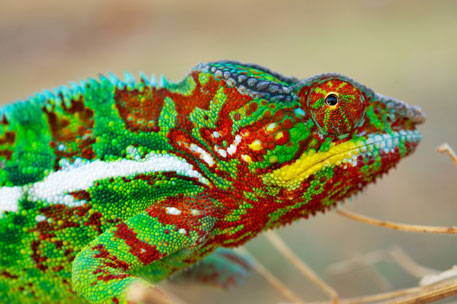 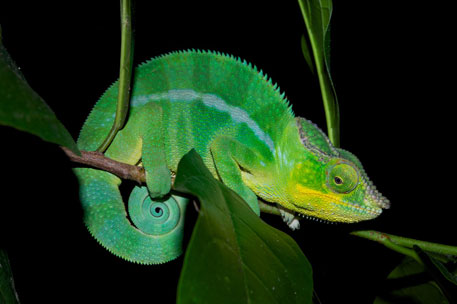 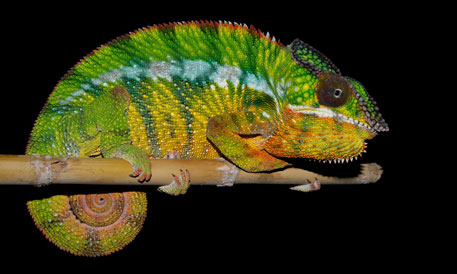 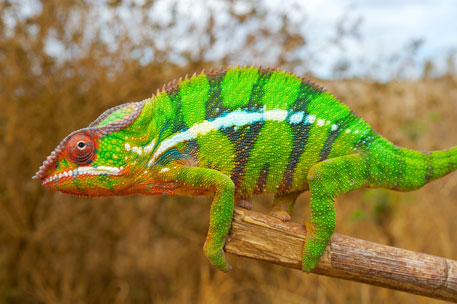 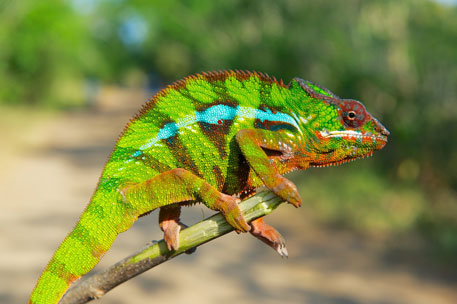