Change in the wind 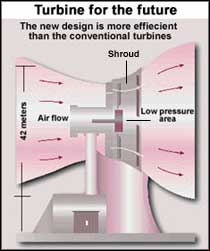 engineers in New Zealand have developed a wind turbine that utilises maximum wind power and converts it into energy. The device has been found to be far efficient than the presently used wind turbines. With this exciting breakthrough, engineers have shown hope that wind power may soon become a potential source of energy. The prototype turbine developed at Vortec Energy, Auckland, could produce nearly three megawatts of power (New Scientist , Vol 155, No 2092).

The engineers at the company employed the same method which was first devised by a us -based company. Nearly 20 years back, Northrop Grumman, Los Angeles, usa , had developed a diffuser augmented wind turbine. The turbine had been fitted with a shroud over its blades that sucks air past the blade at up to twice its normal speed. According to Robin Johannink at the Vortec energy, the turbine uses the same principles that are used by an airfoil on a plane where wind is sucked over the wing to lift and drop the plane.

While conducting wind tunnel tests at Grumman, the engineers found that a turbine with a shroud had a potential to provide an output six times higher than those which do not have. During a wind tunnel test, wind is passed through a tunnel to know how much pressure the tunnel could resist to. However, the company was forced to abandon its idea because of the non-availability of an appropriate material for making the turbine. For this purpose, a light and strong material was required so that the turbine could withstand the strain generated by increased wind speed.

Miles Fox, an engineer based in Auckland, pounced over the opportunity and used the same method to build this efficient turbine. For this purpose, he suggested Vortec energy to use a material developed at a local engineering firm Alexander and Partners. The company fabricated a prototype with the material that was a fibrous ferro-cement reinforced with high tensile wires. The material offers three times the strength of steel when flexed. Now, the prototype wind turbine, which has 7.3-metre blades, is being tested at Wailkaretu, 100 km south of Auckland.

Once the trials are completed, Vortec Energy plans to build two full-scale, 21-storey turbines. A New Zealand-based power company has planned to use one turbine, whereas the other would be used in South Australia.

According to calculations made by the Office of Energy Policy in South Australia, if the turbine could generate 5.5 times as much energy as a conventional turbine, then the cost of electricity would range between 3.5-4 cents per kilowatt. This cost is comparable to the energy cost produced by any conventional source.

The researchers believe that slight modifications in the original design that improves air flow, would lead to a production of six times the energy of a conventional turbine at only three times the construction costs. While only ten 21-story turbines could provide the yearly energy needs of 15,000 homes, up to 100 conventional turbines would be required for the same purpose.