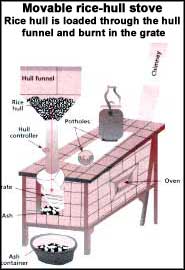 UNUSUAL stoves that make use of rice hull as fuel have been designed by some entrepreneurs in the Philippines. With rising costs of fossil fuels and firewood disappearing from forests, rice-hull stoves are increasingly becoming popular in the service industries as well as in rural households in the Philippines (Sustainable Energy News, No 16).

The country generates around two to three million tonnes of rice hull annually. Of this, only five per cent was being used as fuel and fodder. The rest was either dumped or burned resulting in environmental degradation. Of late, however, rice hull has found use in agriculture and as an alternative for firewood and kerosene. According to a survey done by the Rural Enterprise Development Foundation Inc, a local NGO, on an average, a family of six uses 3.4 tonnes of rice hull per year and saves 10 to 15 per cent in fuel costs. Rice-hull fuel consumption In service industries like restaurants and food processing plants ranged from 16 to 65 tonnes per year.

Rice-hull stoves are available in two models: fixed and movable. Both have a funnel which is used as a storage and passageway for loading rice hull. The movable type is a four-legged table stove with two potholes. It is designed for household use. The fixed type models are heavy-duty stoves used in restaurants and food processing plants. The three to four potholes model used in restaurants can store as much as 300 kg of rice hull at a time. The Philippines -based International Rice Research Institute has developed a single-pothole version which is usually preferred by food processing plants.