The Goan government echoes environmental concerns in its state budget 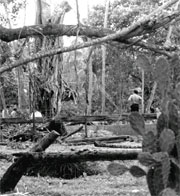 years of environmental campaigning in the country's smallest state seems to have made some dent: politicians here are willing to concede that the environment is a matter of concern. The Goan chief minister, Pratapsing Rane, while presenting the 1997 budget in the last week of March, repeatedly underlined environmental concerns facing the state. He also stressed that only industries which are "environment-friendly, offer substantial employment and are not power guzzlers" would be encouraged in Goa.

Critics dismiss the government's green observations stating that mere words are not enough. For instance, despite the state government's repeated statements about encouraging only "non-polluting industries", the Goan government itself was a keen supporter of the controversial DuPont Nylon 6,6 project here, till it was literally chased away by protesting villagers.

The Rane government has, however, taken a few steps which will give it a green tag. It recently passed a new law which attacks the problem of waste disposal. The fast-urbanising state, which was predominantly rural till recently, is facing major problems disposing its garbage. According to Wilfred Mesquita, the state environment minister, the problem of safe disposal of non-biodegradable garbage is "more pronounced due to the high percentage of urban population coupled with the ever expanding tourism industry". Under the new law, no person can dispose of any non-biodegradable product in a way that damages the drainage or sewage system, affects drains or public health.

Under the law, non-biodegradable garbage has been defined as those consisting of polyethylene, polycarbonate, polypropylene, polystrene, polyvinyl chloride, acrylic, and nylon among others. Commented Rane, "By itself, an Act would not solve the (garbage disposal) problem." He called for elected representatives to play a more crucial role in creating public awareness and greater ngo involvement in public campaigns. The government may also go in for a centralised incinerator "that will effectively combat the problem of garbage disposal, once and for all", according to Rane. The Goan government may soon undertake studies on biodegradable wastes, set up programmes for recycling of wastes and support studies on the feasibility of waste separation.

The government also levied a new 'infrastructure tax' on buildings, an acceptance of the fact that the building boom - allegedly fuelled by political corruption - is taking a heavy toll on Goan landscape.