despite its genome sequenced three years ago, the cholera bacterium continues to dodge all efforts aimed at combating its menace. Now, scientists from the International Centre for Diarrhoeal Diseases Research, Bangladesh (icddr,b), have found out how Vibrio cholerae, the bacterium, renders the 'medicinal ammunition' futile 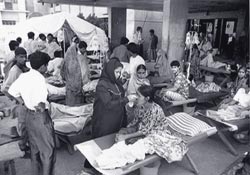 despite its genome sequenced three years ago, the cholera bacterium continues to dodge all efforts aimed at combating its menace. Now, scientists from the International Centre for Diarrhoeal Diseases Research, Bangladesh (icddr,b), have found out how Vibrio cholerae, the bacterium, renders the 'medicinal ammunition' futile.

As per their analysis of the 2002 cholera epidemic of Bangladesh, it has been shuffling its genetic make-up to incorporate antibiotic-resistant genes of other microorganisms. Moreover, the ever-changing profile makes it difficult for the human immune system to recognise the bacterium, and hence it fails to produce antibodies against it. Usually the immune system has an 'imprint' of a pathogen that has attacked the body previously; this prepares it for future assaults. "Our findings shows how a new variant of an old organism overwhelms the public health infrastructure as well as scientific knowledge," says G Balakrish Nair, associate director of icddr,b.

Cholera is a severe diarrhoeal disease, which leads to the excessive loss of essential electrolytes (body fluids) and salt. If left untreated, it can lead to rapid dehydration and death. In 2001, about 2,800 people died worldwide due to the disease, as per official data. The actual figure could be much higher, as many developing countries do not disclose their cholera cases. Across the world, V cholerae's attacks have become more virulent over the years. For instance, as compared to the 1992 levels, there was a four-fold increase in the number of cholera cases admitted to the Kolkata-based Infectious Diseases Hospital (tdh) in 1993. At the peak of the outbreak, idh was admitting one patient every four minutes.

Till 1991, scientists thought that only one family of V cholerae (called o1) and its variants cause epidemic cholera. The other strains were said to be relatively harmless, as they are non-infectious. But in 1992, large parts of Bangladesh and India, particularly coastal areas of Tamil Nadu and West Bengal, were ravaged by a previously unrecognised strain, which was subsequently designated as o139. Since then, this strain has been isolated from 12 other Asian countries, making scientists suspect that the eighth cholera pandemic might be prevalent henceforth. A pandemic is an epidemic that can last for many years or even a few decades at a time; it spreads to many countries across continents and oceans. The first cholera pandemic of 1817-1823 spread from India to Southeast Asia, Central Asia, the Middle East and Russia, killing hundreds of thousands of people. The seventh cholera pandemic, caused by an o1 strain, began in 1961 and lasted for three decades. Scientists suspect o139 emerged after this pandemic.

According to Rita Colwell, a microbiologist at the us-based University of Maryland, the discovery of o139 was a turning point in cholera research because "researchers realised that a new strain could arise from genetic recombination and gene transfer". In fact, the resilient nature of the bug was evident much earlier when the disease invaded Africa and South America after a gap of 100 years. In 1970, o1 invaded West Africa and quickly spread to a number of countries and eventually became endemic throughout the continent. It struck Latin America in 1991; within a short span it spread to 11 countries, and subsequently throughout the continent.

The sequencing of the genomes of the two chromosomes of o1 in 2000 confirmed that V cholerae is a versatile organism capable of living in several habitats, including the human gastro-intestinal tract. Its large chromosome accommodates about 50 important genes, while the small one has the peculiar gene acquisition system, which helps the microbe to acquire genes from other harmless V cholerae strains. The discovery of its ever-changing profile adds to the problems of the developing countries, where safe drinking water -- a must to combat cholera -- is still a distant dream. Moreover, it means that the developing nations need to invest more to tackle the cholera epidemic -- a feat impossible to be accomplished.