Land devoted to non-agricultural use has increased three-fold since Independence. It is set to increase further and faster, according to this article extracted from the latest State of India's Environment report, published by Down To Earth and Centre for Science and Environment 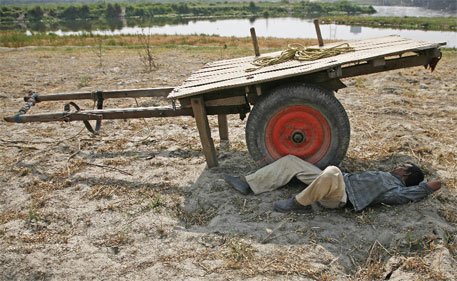 In 2014, India was expected to bring down widespread land conflicts. This is because the country got a new land acquisition law in November 2013 after more than 100 years that gives communities a say in land acquisition. From rural communities to industries, there was an anticipation of faster and transparent land acquisition, and thus, fewer conflicts. But two developments through 2014 put a big question mark over the political will to implement the new law. First, the rules of the Act have not yet been notified. This makes its implementation impossible. Second, and more importantly, a new government, the Bharatiya Janata Party (BJP)-led National Democratic Alliance, came to power with spectacular success in May 2014. One of its key poll promises was to make the investment procedure simpler and faster to revive economic growth. This include simplifying contentious land acquisition for industries.

Since the new government took charge, various key ministers have been demanding amendments to the new law, particularly to clauses that empower communities to grant consent for land acquisition and also the compensation amount. Under the new law, infrastructure projects have to obtain the consent of at least 70 per cent of the affected land owners in case of public-private partnership projects and 80 per cent in case of private projects. In December, finance minister Arun Jaitley confirmed that the government was amending the “strict” land acquisition law even “without the support of the opposition”. One must remember that the BJP had voted in favour of the law when the erstwhile United Progressive Alliance government had brought the Bill. 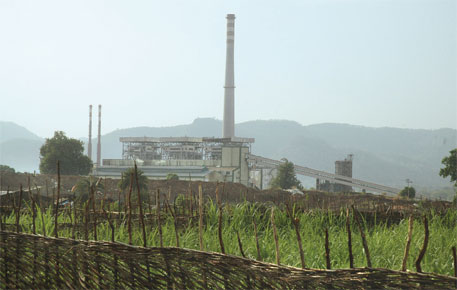 In December, two non-profits monitoring land conflicts in India released a report that indicates how in the future the country would find it tough to tackle such conflicts. The Society for Promotion of Wasteland Development and the Rights and Resources Initiative said in a new survey that land conflicts in India have gone up by 30 per cent in just two years. Disputed land takeovers currently affect one quarter of India’s 664 districts, according to this new estimate. The survey, based on media reports and court cases, showed there were 252 conflicts over land takeovers in 165 districts in 2014, compared with 177 disputes in 130 districts in 2012.

Land use policy is critical for reducing conflicts in India where pressure on land is high. The country accounts for about 2.4 per cent (328.73 million hectares) of the world’s geographical area but supports about 17 per cent of the world’s human population and 15 per cent of the livestock. Continuing fragmentation of land, degrading natural resource base and emerging concerns of climate change have intensified the pressure on this finite resource. The demands of aggressive industrialisation only makes it worse. Since economic liberalisation in the early 1990s, millions of hectares of land has been diverted for non-agricultural purposes. This is risking the food and environment security of millions of people and resulting in large-scale violent conflicts and, subsequently, migration.

Calculations by the Delhi-based non-profit Centre for Science and Environment show that close to 0.57 million hectares (ha) of land was diverted for industrial and non-agricultural purposes between 2007 and October, 2014 (see ‘Land diverted to different sectors’). 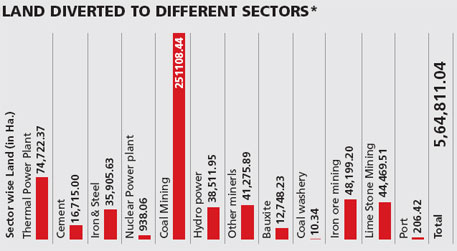 Another study by the Society for Promotion of Wastelands Development released in 2012 shows as per the current pace of expansion in four industrial sectors—agri-business, infrastructure, extraction activities and nonconventional energy—will require an additional 11.45 million ha by 2035. Currently, these sectors possess 6.51 million ha of mainly common and forest land.

This study also claims that land acquisition has impacted one-third of India’s population. Every state and forest is embroiled in disputes over land rights. These disputes play out in courts and on the streets, in the form of mass demonstrations and violent uprisings. The Indian government estimates 10,000 armed fighters and 40,000 supporters are involved in violent struggles, often over land rights, in rural India. 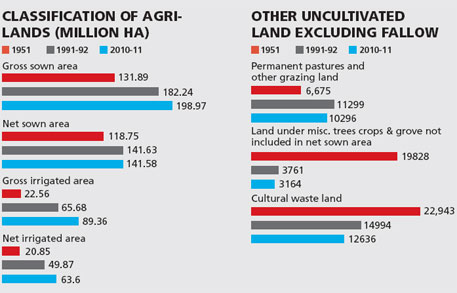 The new government recently launched the “Make in India” campaign to encourage the world’s manufacturing giants to open their units in the country. This will require land on a large scale, creating more pressure. Where will this land come from?

Disturbing trends in land use

Since Independence the total land marked for various uses—residential, industrial, agricultural and public use—has increased little. But the area under non-agricultural use has risen sharply, and the barren and un-cultural land (land that has some top soil unlike barren) reduced drastically. This shows diversion of land for non-agricultural purposes. In the recent past, forest land has also been diverted for other uses on a large scale. As a result, forest cover that increased by 67 per cent between 1951 and 1991, saw an increment of a mere 3.2 per cent between 1991 and 2009 (see ‘Land use in Inda’). On examining the pattern of changes in land utilisation, two disturbing trends emerge. 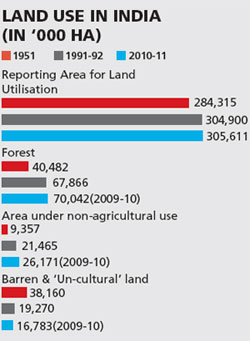 According to a 2006 working group paper of the Eleventh Five Year Plan on rainfed areas, the gross sown area during the previous 15 years remained almost stagnant. The paper also suggested that the decline in net sown area in rainfed regions started from 1999. Even the gross irrigated area has increased fourfold since 1951, while the net irrigated area increased only three times. Wastelands and common land are shrinking: Pastures and other common grazing areas are shrinking fast.

Though the permanent pasture land doubled between 1951 and 1991, it has been declining ever since. This land was used for grazing livestock. The 19th livestock census conducted in 2012 shows their population is on the decline in India. Especially the numbers of goat, sheep, donkey and camel are decreasing sharply. The male cattle and indigenous varieties of almost all livestock which rely of common grazing land are showing a declining trend. 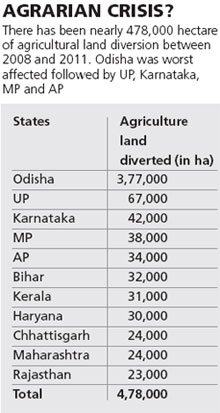 The land under miscellaneous trees and crops too has shrunk by 85 per cent since 1951. The cultural waste land (that can be used for agriculture) has reduced to just half since 1951.

The land resource is facing another major threat: degradation. As per the 2010 estimates of the Indian Council of Agricultural Research, of the country’s total geographical area of 328.73 million ha, about 120.40 million ha is affected by degradation. This results in an annual loss of 5.3 billion tonnes of soil through erosion. According to this research, wind erosion contributes to the largest amount of soil loss, followed by soil acidity, soil alkalinity/sodicity and salinity. About 29 per cent of the eroded soil is permanently lost to sea, 10 per cent is deposited in reservoirs, reducing their storage capacity, and the rest 61 per cent gets shifted from one place to another.

The report also pointed out a significant increase in the use of chemical fertilizers, particularly in the north-western part of the country. This, along with imbalanced nutrient application, nonjudicious use of pesticides, intensive cropping system, decline in soil bio-diversity and depletion of organic matter, requires urgent attention if India’s precious land is to be preserved.