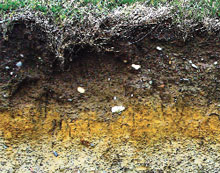 SOIL has the unique ability to sequester carbon. By doing so, it lowers the amount of carbon released in the atmosphere and plays a significant role in the global carbon cycle.

Though the concentration of carbon dioxide in the atmosphere has increased over the years, the rates of carbon sequestration have remained unchanged. Recent scientific developments indicate a shift in our understanding of how sequestration happens in nature, making previous estimates of soil’s carbon absorption capacity questionable. A paper published in Nature Communications in January by scientists from the Technische Universität München, Freising-Weihenstephan, Germany, has shown that sequestration of carbon does not happen uniformly across all types of soils. Instead, there is preferential absorption at certain hotspots in the same soil.

For the study, researchers used soil samples similar to natural top soil and mixed them with litter having labelled carbon and nitrogen isotopes.

Carbon and nitrogen were labelled in the litter to distinguish the new sequestration from the existing one. The incubation continued for 42 days, after which the soil was divided into fractions based on particle size and density.

Samples were then analysed using ultrasensitive nanoscale secondary iron mass spectrometry technique (Nano - SIMS). This allowed them to get the elemental distribution of the samples at very high resolution.

There are no clear answers as to why such a preference occurs. Cordula Vogel, one of the scientists associated with the study, says structural understanding of these hotspots “will allow a better estimation of the total storage capacity of a specific soil. This will depend on the type and amount of minerals in a specific soil, which is dependent on climate, weathering and geologic parent material”. She says, “Such investigations for soils with different mineralogy will be our future target.”

Commenting on the study, S Kundu, principal scientist, division of environmental soil science, Indian Institute of Soil Science, Bhopal, says, “The type of soil taken for this investigation contained 18.5 per cent clay and 18.4 per cent silt and was dominated by chlorite/illite type of minerals. I am sure, a distinctly different picture will emerge if the soil were of the vertisol type, containing 40-60 per cent clay, dominated by smectite/vermiculite type of minerals. More research is needed to interpret the result of this investigation in the context of carbon/nitrogen sequestration in soils of diverse physical, chemical and biological properties.”