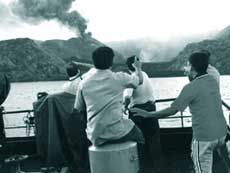 tsunami-ravaged Andaman and Nicobar (a&n) Islands has got an opportunity to benefit from another instance of nature's fury: the eruption of India's lone active volcano on the Barren islands in north Andaman. The local administration has decided to make hay while the sun shines and promote what it calls 'volcano tourism'.

"We have already started a ferry trip which takes tourists to Barren islands and shows them live volcanic activity and we are getting a huge response," says a&n lieutenant governor. The ferryboat carries nearly 100 tourists every Friday night near Barren islands and returns the next day. "It's a wonderful trip. Get onboard and go to bed, next day morning a live volcano will greet you along with the rising sun," says G Bhaskar, a tourist.

The administration is trying to use this opportunity to revive the islands' dying tourism industry, which suffered a heavy blow after the tsunami disaster. There was a 91 per cent drop in the total tourism inflow. The a&n tourism department says only 2,359 tourists visited the islands during January to March 2005, as against previous years' 37,542 during the corresponding period. Tour operators believe post-tsunami fear to be the main reason for the decline. "Immediately after the tsunami, we got all our bookings cancelled and some of us suffered heavy financial losses. But on visiting the Andamans, I found everything fine here. It is wonderful and the live volcano has added another feather in its cap," says Amitabha Pal of Vicky air travels, one of the 10 Kolkata-based tour operators invited by a&n administration to see the ground reality.

Two other volcanoes in the islands, Narcondum and Baratang, have also hit news headlines due to their unique features. Better known as mud volcanoes, they do not spew lava but mud.

The Indian Coast Guard had first reported volcanic activities on the Barren islands on May 28, 2005. The uninhabited island, located 140 kilometres from other islands of the Andaman group, poses no threat to the people of Andaman.