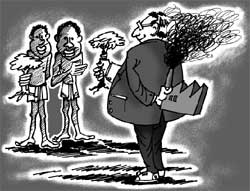 at least two Norwegian companies are acquiring several thousand hectares of land in East Africa to plant fast growing trees like eucalyptus and pine. The groups -- Tree Farms and Norwegian Afforestation Group -- expect to make profits from these plantations by selling timber and wood and in the future, through sale of carbon credits on basis of carbon dioxide storage in the plantations. A study, co 2 lonialism -- Norwegian Tree Plantations, Carbon Credits and Land Conflicts in Uganda conducted by Harald Eraker for Norwatch, a Norwegian non-governmental organisation, documents that both these companies do not deny the fact that carbon trading was an important motive behind their venture.

This seemingly harmless project of planting trees takes a completely different hue against the backdrop of Kyoto Protocol where industrialised countries are committed to cut their overall carbon emissions by at least 5 per cent below 1990 levels in the period 2008-2012. Clean Development Mechanism ( cdm ), a flexibility mechanism, allows industrialised nations and their private corporations to invest in carbon efficient projects in developing countries while the net benefits of carbon reduction accrue to the investors.

These plantations could mark a beginning of more such projects. The modalities and procedures governing cdm are yet to be decided, possibly in the climate negotiations to be continued at the Conference of Parties in November, 2000 in the Hague. The whole idea of accruing carbon credits through afforestation is based on the understanding that a given amount of carbon dioxide is removed from atmosphere and is stored in plants and dry biomass. Unlike the reserves of oil, natural gas and coal, carbon dioxide reserved in trees and other biomass is very unstable and may be released back into the atmosphere, at any time, by burning and logging.

The study also underlines the potential of such afforestation projects in causing social unrest and conflict, especially in Uganda. Local farmers and fisherfolk are dependent on Tree Farms controlled areas for their livelihood. Constant pruning of trees and uprooting of seedlings done by local people to favour agricultural crops in the plantation areas adversely affects the productivity and quality of plantations. This may necessitate eviction of these farmers.

Fast growing trees such as pines and especially eucalyptus need huge amounts of water to grow and hence such plantations can result in depletion of groundwater reserves thereby disturbing the ecological balance in the area.