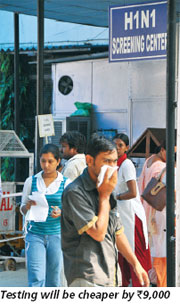 At present, India imports kits approved by the Centre for Disease Control from the US and Switzerland. They take 24 hours to give results. The three Indian companies used different protocols to develop their individual detection kits. The H1N1 detection kit developed in DRDO'S lab— the Defence Research and Development Establishment (DRDE)—used a fragment of the viral DNA for identification.

This procedure is based on Real Time loop amplification methodology. The methodology helps in rapid detection of the virus as compared to the test system, used in the imported kits. Ocimum's OciDetect detection kit identifies a viral RNA. Imperial Life Sciences used the basic molecular typing technique for its product.

The manufacturers claim the kits will give 99.9 per cent accurate results. "The idea was to give the same efficiency at a cheaper cost," a spokesperson of DRDO said. "Though the final cost per test has not been worked out, the government was clear about keeping it less than

Katoch said the virus may soon become endemic and be treated as seasonal flu. "We would still need the diagnostic tools for surveillance," Katoch added.