Cheaper vaccine to check hepatitis B 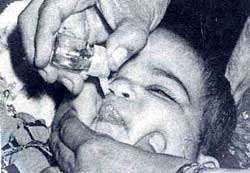 HEPATITIS B is a disease more lethal than AIDS, claiming more lives in a day than the latter does in a year. But now genetic engineering has made possible large-scale production of hepatitis B vaccine at only 2 per cent of the earlier cost.

The worldwide Expanded Programme on Immunisation (EPI), a World Health Organisation (WHO)-backed machinery built up in the 1980s, will be used in this decade to control hepatitis B. There are about one billion infected persons -- some 300 million of them chronic carriers of the virus. Hepatitis B is also a major cause of liver cancer. So the new vaccines are, in effect, the first genetically-engineered cancer treatment.

The global advisory group of the EPI will meet in October to finalise the schedules for hepatitis B immunisation in the 167 countries it covers. India will definitely be high on the priority list since, throughout the Northeast, more than 8 per cent of the population today is affected by hepatitis B, according to a WHO study. The incidence rate over the rest of the country is between 2 per cent and 7 per cent.

Until recently, the vaccine was made from blood taken from carriers and priced steeply at US $110 per course. Now, however, genetic engineering has slashed the cost to US $2.80. Mass production could bring the cost down to just US $1.50. This has made possible the inclusion of the vaccine in the EPI at US $100 million a year.

According to a senior official of the department of biotechnology, India is unlikely to depend on UNICEF to procure vaccines for the hepatitis B programme. "Though no formal proposal has been made yet, we are likely to begin production of the vaccine soon," he says.

Besides incorporating the hepatitis B vaccine -- the seventh after those already administered against tuberculosis, diphtheria, polio, tetanus, whooping cough and measles -- the EPI is also trying to strengthen its existing vaccines. Though nearly three million child deaths are being prevented every year by immunisation, the global coverage is still under 85 per cent.

Standing in the way of success are some complex logistics: immunisation workers must reach a child half-a-dozen times over 18 months for complete protection. "The only way out is to develop a single-shot, multivalent vaccine package," says a senior WHO official. That, in fact, is the imperative of the Children's Vaccine Initiative (CVI), launched jointly by WHO, UNICEF and UNDP.

Work is in progress on a "super vaccine", which will combine all the major vaccines. It will probably be administered orally (to simplify delivery) in slow-release micro-capsules, says a local WHO official. It has recently been established that most vaccines are best absorbed through the lymphatic system, which drains the free fluid between the cells (tissue fluid) back into the general circulation. And since the gastrointestinal tract is richly supplied with lymphatic vessels -- they also absorb fats from food -- oral vaccines are taken in very efficiently.