Cheetah trade could drive the species to extinction 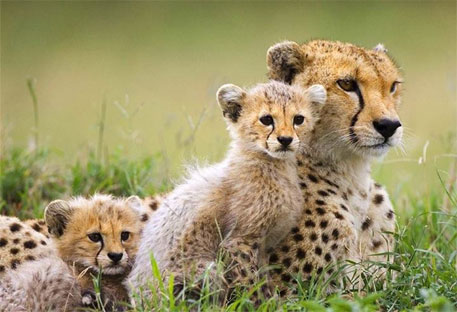 The rising trade in cheetahs for luxury pets in the West Asia is driving critical populations of the wild cat to extinction, says a new research. The report, published by study by Convention on the Trade in Endangered Species (Cites), also says that cheetahs, famous as the world’s fastest moving land animal, lost about 90 per cent of their population over the last century as its huge ranges in Africa and Asia have been taken over by farmland. Fewer than 10,000 remain and their numbers are falling.

The report also talks about gruesome toll of the trade, with up to two-thirds of the cheetah cubs being smuggled across war-torn Horn of Africa and dying en route. Indicators which support major findings include dozens of news articles, hundreds of social media posts, and the observations of NGOs that have researched the issue. The report has also found instances and published pictures of the big cats riding as car passengers, being walked on leashes and even being exercised on treadmills in Gulf countries.

In north, west and central Africa, there are only five known wild cheetah populations, possibly totalling 450 animals. Southern Africa has the largest regional population of cheetahs.  In South Africa, about 90 live captive-bred cheetahs are exported a year to zoos, although conservationists worry that illegal animals could be passed off as these legally-traded cheetahs. States consider illegal trade to be a significant threat. There is also a demand for cheetah-skin shoes in Sudan, where they are considered to confer high-status.

The illegal trade has endangered not only the cheetah subspecies from the Horn of Africa but may potentially also affect the last remaining population of 40-100 Asiatic cheetahs in Iran. According to a study published in Hamilton Spectator, the Asiatic cheetah, an equally fast cousin of the African cat, once ranged from the Red Sea to India, but its numbers shrunk over the past century to the point that it is now hanging on by a thin thread — an estimated 50 to 70 animals remaining in Iran, mostly in the east of the country. That's down from as many as 400 in the 1990s.

Asiatic cheetahs were traditionally trained for emperors and kings in Iran and India to hunt gazelles. They disappeared across West Asia about 100 years ago and vanished in India around 1947. African cheetahs are also a threatened species, with an estimated 10,000 adults remaining.

Their journey from Horn of Africa to Gulf

Cheetahs are unusually easy to tame, especially as cubs. East Africa was the region with the most evidence of illegal trade in live cheetahs and where it likely has the greatest negative impact on wild populations, said the report.  “The exact origin of the wild-caught cheetah cubs which supply this demand is unclear, but the trade is mainly carried out by ethnic Somalis throughout the Horn of Africa region, and has been ongoing for at least 15 years,” says the report. The primary destination of live cheetahs from this region, based on multiple confirmations and lines of evidence, are the Gulf states, and the primary means of transport is by boat out of the Somali regions, to the coast of Yemen, and across Yemeni borders by vehicle. 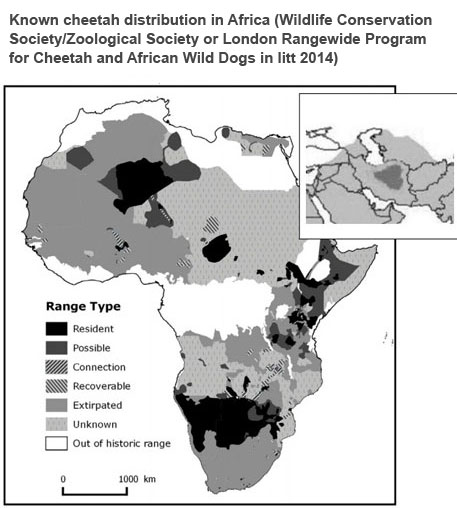 “This whole trade had not been appreciated by the public or by the conservation world,” says Nick Mitchell, a wildlife expert who contributed to the Cites report, the first comprehensive overview of the cheetah trade. “If we do not act now on the trade and land-use change, then we can be certainly losing sub-populations in a few years,” adds the expert who is also the eastern African co-ordinator of the Rangewide Conservation Programme for Cheetah and African Wild Dogs, a joint project of the Zoological Society of London and the Wildlife Conservation Society. 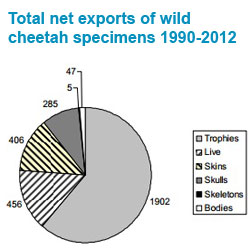 Not only are the cheetahs dying increasingly during transportation, they do not breed easily in captivity.  While the captive cheetah industry in South Africa plays an important role in raising awareness and generating revenue for local economies, the trade in captive animals in South Africa was flagged as a threat to cheetahs within the country.

The report also says that it is a good sign that Qatar, the Emirates, Kuwait, all have recognised the problem. David Morgan, head of science at Cites, says: “Middle Eastern countries spoke up very clearly and this has been a positive development. Qatar, the Emirates, Kuwait all recognised the problem.” The expert adds that demand for endangered species, including big cats, was showing a trend from health to wealth—a growing emphasis on status symbols over traditional medicines.

According to Interpol, the illegal wildlife trade across the world is worth $10-20bn a year, the fourth most lucrative black market after drugs, people and arms smuggling.

Suggesting measures to curb illegal trade, the report emphasises on the need to adopt a cooperative approach to tackle the region-wide problems of uncontrolled keeping of and trade in big cats, as policies and practice have been insufficient to deter the spread of illegally imported wild cheetah cubs.

It has been recommended that parties which have been identified in this study as consumer markets for illegally imported live wild cheetahs—Bahrain, Kuwait, Oman, Qatar, Saudi Arabia and the United Arab Emirates—should be requested to submit a report on the legislative and regulatory controls in place and in development regarding cheetahs in captivity. Gulf states, as the prime destination for illegal wild cheetahs, need to significantly step up enforcement efforts at the borders and internally, adds the study.