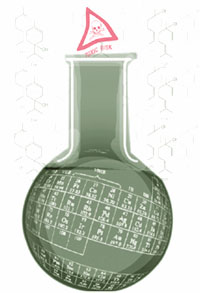 • More than 1,500 new chemicals are introduced annually the world over, that is, more than 4 chemicals daily

• A re these chemicals tested for safety? Rarely, because the law in most countries lacks such a requirement

• Without any or only rudimentary tests for safety, most chemicals are introduced into everyday products such as cosmetics, household appliances, furniture and toys. According to the European Environment Agency, "For most of these chemicals we simply do not know how they pass through the environment, whether they are accumulated, and how they affect living organisms at different concentrations"

• In Europe, for 75 per cent of about 3,000 chemicals with an annual production of more than 1,000 tonnes each, toxicity data is insufficient for "minimal" risk assessment under OECD guidelines

• Chemical industry only does very crude toxicity screening tests just to ensure the products pose no immediate danger to the consumer. Standard tests for cancer, birth defects and other long-term health problems are almost never performed

• US authorities approved 23,971 new chemicals from 1976 to 1994. 90 per cent of them were approved with no restrictions on proposed use and production and with no requests for additional test data. Less than 4 per cent of such submissions contain any measured values for the properties of the chemical. Less than 1 per cent submissions contain biodegradation data, which is an indicator of the persistence of chemicals in the environment

• Chemical industry claims that lower doses pose no harm. But studies show low doses can be more toxic than high doses, especially for chemicals such as certain pyrethyroid insecticides that affect the endocrine (hormone) system. The reason appears to be that at higher doses, the defence mechanisms kick in

• Finally, safety tests, seldom conducted, are usually on animals. They can be misleading. Animal tests missed the toxic dose of polychlorinated biphenyls by 10,000 times