Chemical companies with a shady past 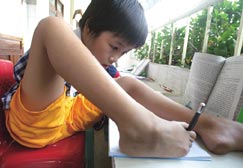 The Vietnam Association for Victims of Agent Orange/Dioxin (vavo) has filed a lawsuit against 37 us-based chemical companies, which supplied Agent Orange (ao) during the Vietnam war. Health problems arising out of the continuous spray of the toxic chemical in Vietnam between 1961 and 1971 form the basis of the class action complaint. The lawsuit has been submitted to the us Federal Court in Brooklyn, New York, and demands unspecified compensation on behalf of nearly 4 million victims.

"The companies named include Dow Chemical Company, Monsanto Chemical Company, Pharmacia Corporation and Hercules Incorporated," revealed Nguyen Trong Nhan, vice-chairperson of the Hanoi-based vavo. "Three Vietnamese individuals -- Nguyen Van Quy, Phan Thi Phi Phi and Duong Quynh Hoa -- are co-plaintiffs in the case," added Nguyen. ao is a herbicide which comprises 2,4-dichlorophenoxyacetic acid; 2,4,5-trichlorophenoxyacetic acid, and its contaminant tetrachlorodibenzo-p-dioxin (tcdd or dioxin); cacodylic acid; and picloram. The chemical was used to defoliate forests and destroy crops during the war. The lawsuit states that the companies were aware that the herbicides would be sprayed in Vietnam, but didn't object.

The misuse of ao has led to mass health disorders in Vietnam. Plaintiff Phan Thi, a doctor who has been studying victims for the past 40 years, said: "About 100 million litres of chemicals were sprayed during the war, out of which 49 million litres were ao. We have found dioxin levels to be as high as one million parts per trillion in the environment."

The us National Academy of Science accepts only 13 diseases linked to ao exposure, but Phan Thi has come across many more. "Not only have I seen cases of spina bifida (spinal birth defect), but also mental retardation, cerebral palsy, abortion, stillbirth, premature delivery and many forms of cancers," she asserted. "While the us war veterans received compensation amounting to us $180 million, the Vietnamese victims got nothing," pointed out Nguyen.