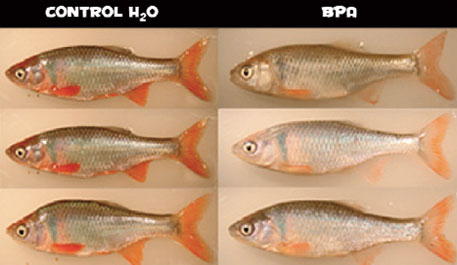 BISPHENOL A, commonly known as BPA, is found in almost all plastic products, from linings of metal cans to feeding bottles for babies. It has been found to cause developmental defects in animals. Though its effect on humans is still debated, its use has been banned in Canada, Japan and China. The chemical functions like estrogen, the female sex hormone responsible for development and proper functioning of sexual organs and regulation of sexual behaviour. But as BPA is not the real hormone, it disrupts reproductive behaviour.

This has been proved in the case of fish exposed to BPA. Rivers and streams are often dumping grounds of products laced with BPA. It has now been found that under BPA’s spell, fish court members of other species, which could lead to interbreeding. In nature, members of one species do not generally mate with members of a different species. But why is interbreeding a threat? “It can lead to loss of native species and disrupt community structure; it can affect evolution as hybridisation may result in new genetic entities,” says Jessica Lyn Ward, ecology professor at University of Minnesota in the US and lead author of the study published in Evolutionary Applications on July 10.

For the experiment, the researchers took two fish, blacktail shiner (Cyprinella venusta ) and red shiner (Cyprinella lutrensis ). For four weeks, the fish were kept separately in aerated containers to ease them into lab conditions. A week before the experiment, the species were transferred to glass tanks. Researchers could make out which fish were reproductively inclined based on their skin colour and body shape—the fish got brighter and bigger. These motivated individuals from both species were then introduced into three types of glass-walled tanks—one with BPA, second with triethylene glycol and third with water. Four fish, one male and female of each species, were kept in these tanks for 14 days.

The team put the fish to behavioural tests on day 15. All possible combinations using both species and all treatment groups were tested. For example, in one setup a female fish was introduced along with male fish from both the species.

Researchers observed that females of both species exposed to BPA spent equal time with males of both the species. But females of the control experiments spent more time with males of their species. Similar responses were observed in males. The researchers observed that the intensity of the body colour of the red shiner exposed to BPA was less.

“We did not test intraspecific mating. But I believe female red shiners would discriminate against an exposed con specific (member of same species) with reduced colouration in favour of an unexposed conspecific male with bright colouration,” says Ward. Neeta Sehgal, professor of zoology at Delhi University, adds that the hybrids produced in this way could either wipe the species out or adapt to chemicals like BPA.

Earlier studies have also shown the adverse effects of chemicals that behave like estrogens in animals. For example, 17-ethinylestradiol, the main component of oral contraceptive pills, made male pipefish develop feminine characteristics. Females do not find them attractive to mate and this can lead to decrease in their population, according to a study published in Hormones and Behaviour in 2010. Similarly, the population of African clawed frog can go down as the mating calls made by male frogs exposed to endocrine disruptors are decreasing. The study was published in February in PLoS ONE. “These chemicals get deposited in muscles of the fish. When humans eat the fish, they could put themselves to unknown risks,” Sehgal cautions.