Waters of the Sunderbans are turning hostile to estuarine life 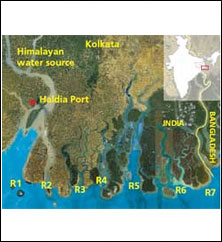 The waters in the Sunderban delta are fast changing in quality. The western waters are fresher, lighter and less saline while the eastern sector is saltier and less transparency. Both are warmer—a sure consequence of climate change.

Abhijit Mitra’s team from the department of marine science in the University of Calcutta collaborated with the school for marine science and technology in usa’s University of Massachusetts in a study that quantified the physicochemical changes in the Sunderban delta. Data was taken from the archives dating from 1980 to 2007.

The chemistry of an estuary, where river and sea waters mix, is unique; so are its flora and fauna.


Any change would have a far-reaching effect. The findings of this study published in the November 25 issue of Current Science hint at the unpleasant fate of life in estuaries around a rapidly warming planet.

The sea surface temperature at the Sunderban delta has been increasing at a rate of 0.5°C per decade. This surpasses the warming of global oceans at 0.06°C per decade.

The pH has decreased overall but stands higher at 8.25-8.33 than the global figure of 8.179. The waters of the eastern Sunderban are relatively more acidic. Rising temperatures decrease oxygen’s solubility in water as is happening at the eastern end. But in the western sector it has increased due to addition of meltwater. Waters of the entire Sunderban have turned murkier due to increased concentration of particulate matter from heavy waste disposal and soil erosion.

Mitra’s methods were questioned, though. The sea surface temperature was measured too close to land and might not match readings taken further away, said A S Unnikrishnan, physical oceanographer with India’s National Institute of Oceanography in Goa.

The Sunderbans are home to 260 varieties of fish, 25 turtle species, 315 bird species and 59 reptile species along with bigger prowlers like the tiger and the estuarine crocodile, said a 2003 UN report. The Inter-governmental Panel on Climate Change concluded 30 per cent of life here would go extinct if average temperature increases by more than 1.5 -2.5°C.

Clams, oysters and shrimps cannot build shells in acidic waters. The decreased water transparency affects fish populations that depend on phytoplanktons for food. “Preventing sunlight from penetrating the waters affects the growth of phytoplanktons, the primary food producers and, in turn, adversely affects the food web”, said Baban Ingole, biologist at India’s National Institute of Oceanography in Goa. Since the tigers thrive on crabs and shellfish, their populations would be affected too.

A 1994 study by scientists from Bangladesh said shrubs that can tolerate highly brackish waters would replace high quality timber trees. If the region’s flora collapses, the dependant fauna would follow suit.